It's a hard concept to grasp (according to The Daily Telegraph)

Yes, it's going to cause chaos and confusion, the days of the two popes are back with us again and (panic, panic) how will the Vatican and the wider world cope?

In mean two popes.....how will we tell them apart?

They will both be wearing white (horror of horrors)

They will both be male (sorry LGBTs) 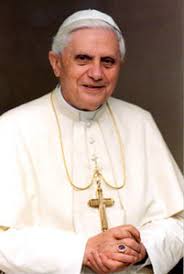 After tomorrow this  man will not be the Pope


In a few week's time the Pope may
look like this, but a little chubbier


OK, OK, settle down media pundits; here is how it will work:-

His successor, (hopefully a rather amiable and holy American Cardinal), will be the one wearing the red shoes.

He will be addressed as "Your Holiness" referred to as 'The Pope' or 'The Holy Father' and he will be the one not eating bratwurst.

They will live not too far apart from each other but reports so far indicate that Fr Lombardi, Vatican PRO will be issuing photofits of each so that the Bishops of England and Wales can be absolutely sure that the person they are slagging off is definitely THE POPE.
Posted by Richard Collins at Wednesday, February 27, 2013