Did Our Lord ever laugh?

Of course, He did. He was human as well as divine and laughter must have been commonplace at the carpenter's bench.

But we seldom see images of Christ laughing, or even smiling for that matter.

Would it be regarded as frivolous for the maker of the world, the Supreme Spirit, to be observed laughing?

Well, yes, in a sense, it would. God the Son offered up His life for us all and suffered both mentally and physically in a most horrendous fashion; that is not a matter for congeniality.

But, as a child, back in Nazareth, Our Blessed Lord must have laughed alongside his holy father at the workbench and, sitting round the table, surely He would have gently laughed with His Blessed Mother?

Well - He did, of course, and here is the image that proves the point: 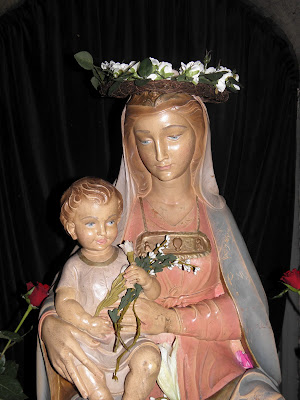 This statue of Madonna and Child is copied from a statuette by the famous Florentine sculptor, Antonio Gamberelli Rossellino.

It is known as ‘The Virgin with Laughing Child’ and the original was made circa 1465.

This statue now rests in a side chapel at the Shrine of St Winefride in Holywell in North Wales.

If you look closely you will see that the infant Christ is not merely smiling; He is laughing, as any child of six or eight months of age might do.

Sometimes we tend to forget the human element of Our Blessed Lord, the fact that He suffered the same problems that children do today. A scraped knee, a splinter in the hand (prophetic indeed) or a speck of dirt in His eye.

And who, with worldly cares, would not be ecstatic to be held in the arms of the Mother of us all?