Holywell - a step closer to heaven 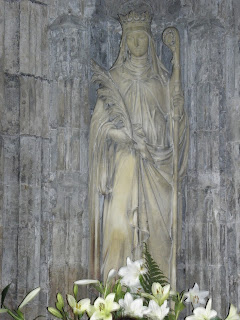 The Shrine of St Winefride - Virgin and Martyr

Last Sunday's pilgrimage to the Shrine of St Winefride in North Wales was, as well as being a spiritual journey in the manner of all good pilgrimages, a profound and uplifting experience.

Organised by the Latin Mass Society of England and Wales it attracted an estimated 400 people whom, as well as attending to their duties as pilgrims also wished to attend the Pontifical High Mass offered by 62 year old Bishop Fernando Areas Rifan, Apostolic Administrator of the Personal Apostolic Administration of St Jean Marie Vianney, from Campos, Brazil.
An interesting choice of celebrant as Bishop Rifan was, at one time, "separated" from Holy Mother Church and aligned with the SSPX. He and his Diocese returned to the fold (some might say that he had never left it) in or around the year 2004 and he was then subjected to cries of "traitor" from Bishop Fellay and others within the Society.
The Bishop remains a controversial figure as far as traditionalists are concerned but, after witnessing his devout manner and mellifluous voice and hearing his beautifully articulated sermon, there could be few who would doubt his loyalty to Rome and to tradition.

In a packed church and on a sanctuary jam packed with Canons, Monsignors, Priests and altar servers, the Mass began.
The Manchester Mozart Schola sang Wolfgang's Coronation Mass and it was rich and beautiful to the extreme; indeed, so much so that it actually became a distraction from the all important proceedings. But a magnificent distraction for all of that.

In his Sermon, the Bishop uttered the immortal words: "It is not our Mass it is the Lord's Mass" Another way of saying "Don't mess with this it is not within your remit". I am sure the LMS will be publishing the full text so I will not attempt to recall the full homily, suffice to say that it was brief and to the point; two essentials for a sermon that few observe.

The mini bus carrying the bulk (13 of us all told) of the Confraternity of the Holy Cross from Menevia Diocese made an arduous journey from the Shrine of Our Lady of the Taper in Cardigan to the Shrine of St Winefride in Holywell. From the West of Wales to the North.

To those unfamiliar with the geography of Wales let me say that it is not a great distance; maybe 130 or possibly, 140 miles. But the route or routes are winding and up hill and down dale and it took us the best part of 6 hours including a break for a most unhealthy intake of junk food.

Some five or six other members of the Confraternity travelled independently so our numbers rose to just about 5% of the assembly.

After Mass we processed from the church down the hill towards the medieval holy well and the actual shrine. As we went we recited the Rosary and crammed (those of us in the forefront) into the well house where the shrine is located.

There, beneath the shrine we were able to sing a  hymn to St Winefride (a somewhat modern one I believe but none the worse for that) and individually venerate the relic of the holy saint.

Then, as we filed past after the veneration we were able to kneel and kiss His Lordship's ring, an act designed to cause any modernist to have an attack of the vapours.

Some observations on the day: it was well organised by the LMS and full credit to them. It would have been good if the Mass pamphlet that was issued had carried details of the schola and some attention to proof reading would have been worthwhile, especially as "God" was misspelt. But these are niggles viewed within the full framework of the day.

All in all there cannot have been many (or any) who wound their weary way home without feeling that they had taken part in one of the Church's great events and were one step closer to heaven as a result.

I remembered all of you collectively in my prayers and intentions and, as many as my shrinking brain would allow, I remembered by name.

And thank you to Brian of Umblepie blog for the words and music to a slightly more traditional version of a hymn to St Winefride; it would be good to restore it to the hymn sheets for future pilgrimages. When I learn how to save and copy it I will reproduce it.