The past five days and the past eight hundred years

Some may have noticed (and others not noticed) that there has been a lull in posting for five days.
This was all due to the generosity of our four children who stumped up the necessary to send us on a one day trip on the Orient Express from Victoria to the Kent coast. 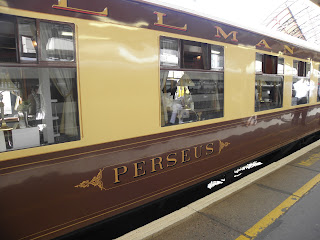 It was, a trip to remember; we sailed graciously through Swanley, hotly through Chilham, at a gallop through Canterbury and sheepishly through Ramsgate and on to the Kent coast.
As we thundered on in opulent surroundings, I cast a thought to the extraordinary Catholic parishes that we passed close to; first, of course, was Blackfen and Fr Tim Finigan and then Maidstone, Ashford home of (I think, Fr John Boyle who is away in the States at present), then, finally, Ramsgate and the young Fr Marcus Holden, son of West Wales fame.
Truly, Southwark Diocese must have the greatest concentration of Latin Masses in England and Wales.

For those unfamiliar with the Orient Express, think Pullman Trains, think Agatha Christie and think also of a time when life was less frenetic and the more fortunate of society were able to enjoy a certain style of comfort and attention.

The deal was a round trip of some 170 plus miles together with a glass or two of champagne and a five course meal avec a complimentary bottle of vin glug....except that it was very good vin glug.
I settled back in my armchair seat and tried hard to keep Laurence England, who constantly prods my Catholic social conscience, out of my thoughts. It was hard.

Hertfordshire is a county that I, certainly, am guilty of overlooking; it is easily accessible yet has all the appearances of being a thousand miles from a big city.

Our inn was The Brocket Arms in a hamlet called Ayot St Lawrence and once served as the lodgings for the local monks who offered up the Latin Mass in the local church built in 1150.

Come the so called Reformation and the church was vandalised and the resident monk (according to legend) hanged for his faith in the inn (I was not aware of this at the time and would have offered up a prayer for his immortal soul had I known).

So, for some 860 years, this inn has been a place of rest, initially, for our priests and then, in the past 400 years for the local gentry and the yeomen and women of Merry England, ploughboys, rook scarers, mole catchers, hedgers and ditchers, blacksmiths and their superiors, would have quenched their thirsts at this little haven of Englishness.

In later years, George Bernard Shaw would have joined them as his house lies only some 200 yards away, but, the least said about GBS, the better in my book.

But I do rather believe that Chesterton and Belloc would have supped their foamy pints here from time to time.

Finally, home on Sunday, stopping off for the 10am Mass at St Saviour's in Bristol, home of the SSPX.
Gloriously sung, well served and MC'd and perfect in every way.

I know that I have mentioned before that the SSPX Masses are different from the EF Masses celebrated in churches that are really nuanced towards the modern Mass.
It is not really surprising; the architecture is created especially for the TLM (even though St Saviour's was once High Anglican); the tabernacles are in the right place, the aura is right. The churches are untainted by modernism.

The only odd thing was that, knowing what sticklers the SSPX priests are for liturgical accuracy, I was surprised that the celebrant did not remove his maniple when he entered the pulpit to preach.
I do not highlight this from any nitpicking aspect, just a minor curiosity on my part.
Someone will now comment, I am sure, that Pope St Evaristus granted an indult to this effect in the year dot, never mind, it's not worth losing any sleep over.

We did, however, meet up with many of our good friends (some of whom, we had not seen for over 25 years). It was great to meet Joe and Clare Bevan and their family and Nigel Mills from Bath. And, even some that we missed in the throng after Mass (the chapel was packed out). Stephen from the Salisbury area was one that we missed, sorry Stephen if you read this.

More on the old church of St Lawrence in future posts.
Posted by Richard Collins at Sunday, July 08, 2012