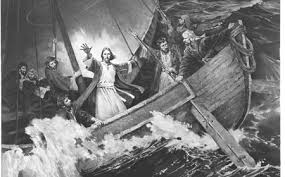 Yes, of course, it was a shock and yes, we are sad to lose him, but this is the Catholic Church, the Mystical Body of Christ, the Church of Apostolic Succession guided by the Holy Spirit that we are talking about.

God is our Father, His Divine Son, our Lord and Saviour.

What's to worry about?


"And it came to pass on a certain day, that He went into a small ship with His disciples, and He said to them: Let us go over to the other side of the lake.
And they launched forth.

And when they were sailing, He slept; and there came down a storm of wind on the lake, and they were filled, and were in danger.

And they came and awaked Him saying, Master, we perish. But He, arising, rebuked the wind and the raging of the water: and it ceased, and there was a calm.

And He said to them: Where is your faith? And they being afraid, wondered saying, one to another: Who is this (think you) that He commandeth both the winds and the sea and they obey Him?"