Did Tatchell write the script?

Reports are circulating that homosexual rights campaigner and co-ordinator of the Equal Love UK campaign, Peter Tatchell, actually wrote the Prime Minister's speech for him. 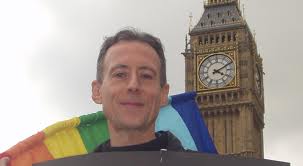 The Rainbow flag has replaced the "Union" Jack

So here, for the sake of comparison is the speech made by Tatchell in October 2012 and beneath it, Prime Minister Cameron's statement on the issue:-

"For many months, the Equal Love campaign has been lobbying the Conservative party and government, and Tory MPs and activists, urging them to support the legalisation of same-sex marriages and opposite-sex civil partnerships.
We’ve recently won the government’s commitment to marriage equality, but not to heterosexual civil partnerships. Never mind. We’ll keep fighting for the rights of straight couples until they get equality too.
Below is an article I wrote for Progressive Conscience, a liberal Conservative journal, which was published shortly after the government announced its commitment to marriage equality but before David Cameron’s speech to the recent Conservative party conference.
As you can see, to win over Conservatives we pitched our arguments to appeal to their Conservative values.
We were delighted that David Cameron backed marriage equality in his keynote party conference address.
Indeed, we were surprised, and flattered, that the Prime Minister’s speech echoed very closely the wording of our Equal Love briefings: Gay marriage is a Conservative value.
We said:
“Conservatives rightly encourage and approve loving, stable relationships because enduring care and commitment are good for individuals, families and for the well-being of society as a whole. If marriage is a Conservative value, then same-sex marriage is consistent with this value. Far from undermining marriage, gay marriage strengthens it. Conservatives believe in marriage. They should therefore support same-sex marriage precisely because they are Conservatives.”

Let me take this opportunity to thank everyone is who supporting the Equal Love campaign in the UK, especially the eight couples who have taken their case to the European Court of Human Rights.
Together, with your help, we will win. Marriage equality is an unstoppable global trend.
Best wishes, Peter Tatchell, Coordinator of the Equal Love UK campaign"
http://www.petertatchell.net/lgbt_rights/partnerships/how-the-tories-were-won-to-marriage-equality.htm  -

And David Cameron, leader of the Conservative Party  (but not for much longer)

"But for me, leadership on families also means speaking out on marriage. Marriage is not just a piece of paper. It pulls couples together through the ebb and flow of life. It gives children stability. And it says powerful things about what we should value. So yes, we will recognise marriage in the tax system.
But we're also doing something else. I once stood before a Conservative conference and said it shouldn't matter whether commitment was between a man and a woman, a woman and a woman, or a man and another man. You applauded me for that. Five years on, we're consulting on legalising gay marriage.
And to anyone who has reservations, I say: Yes, it's about equality, but it's also about something else: commitment. Conservatives believe in the ties that bind us; that society is stronger when we make vows to each other and support each other. So I don't support gay marriage despite being a Conservative. I support gay marriage because I'm a Conservative".
http://www.guardian.co.uk/politics/2011/oct/05/david-cameron-conservative-party-speech