Sedevacantism and the way of Our Lady 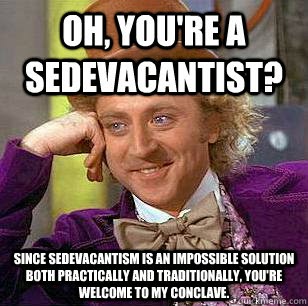 I received some sad news concerning good friends who apparently are in the process of becoming sedevacantists  -  the belief that we have no valid pope and, indeed, have not had one since the reign of Pope Piux XII.

It is always sad when a family member walks out.

The family left behind are hit hard by such a move, why?

Imagine your son or daughter saying that they no longer believe in the family structure and that, therefore, they will no longer be attending family events; birthdays, weddings, parties of any kind.

Of course, to walk out on Christ is a far more serious affair although, I doubt that they would see it from that point of view.

I guess that their case would be based on the fact that they wish to follow Christ more authentically (in their minds) and that leaving the 'family' is a sacrifice that they must make for the sake of Christ.

I don't know. The Church in England and Wales has lost some real beacons of light to sedevacantism.

Bishop Williamson of the SSPX, whom I presume is a 'vacant seater' is another, less mourned loss.

Some years ago our family were linked with a large family of French traditional Catholics. We visited one another, their children came to stay to improve their English over the 1990 'dry' period in Britain, when Latin Masses were as rare as hen's teeth.

Over the years we realised that they were SSPX, but, no matter.

Two of the sons went forward to become seminarians and, finally, one visited as a priest, keen to celebrate Mass in our home.
A warning bell began to ring in my brain and I made enquiries.

He was not a Catholic priest but a member of a 'sedevacantist' group who had appointed their own pope who now lives on the top floor of a Paris apartment.

I discovered that there are many such groups, all with their various nominated popes living in Paris or Milwaukee or Chipping Sodbury.

Needless to say, I quashed the celebration of the 'Mass' that he had planned.

I have never seen the logic of disregarding Rome in favour of some dodgy voting of 20 or 30 of the followers to determine the appointment of Pope X.

Michael Voris makes a good point regarding sedevacantism and that is, that Our Lady stayed by her Son on the cross; she did not walk away:-

None of these responses is authentically Catholic. The only authentically Catholic response is the example of Our Lady who, throughout Her Son's Passion, stood by Him with full confidence, in spite of all appearances, that God's Will was and would be done. No matter how bloodied, beaten and defeated Our Lord appeared throughout His Passion and Death, He was still Our Lord, and neither the flight of the Apostles nor their fear is remembered as a positive example to follow.

We are called in the face of the Church's Passion to be faithful disciples close to Our Lady. To titillate ourselves with “ecclesiastical porn,” to feed our anxieties and worries with doubts about Our Lord's very promise to be with His Church until the end of time, to reject Our Lord's "Peace be to you" spoken to His very frightened followers after the Resurrection, is to abandon Our Lord Himself. The crisis in the Church today invites us to be Saints not cowards. No matter how it appears, we are always able to be "persevering in the doctrine of the Apostles, and in the communication of the breaking of bread, and in prayers." (Acts 2:42) We can continue to be faithful to the duties of our state in life, to daily recitation of the Rosary, to the corporal and spiritual works of mercy, to the need for penance and mortification, to the need to grow in our knowledge and understanding of the Faith"

I think that, in our current crisis within the Church, many are hearing the false call of 'no Pope' and that many souls are in the process of becoming lost.

But we are bound to the Mystical Body and, to cut off part of that body is to cause immense pain and suffering, not least of all to Our Blessed Lord who sacrificed Himself for us so that we could grow as a family with Him, not in some Paris suburb but in the fullness and richness of His Church in Rome.

Please pray for my friends.

Email ThisBlogThis!Share to TwitterShare to FacebookShare to Pinterest
Labels: Sedevacantists, The Mystical Body of Christ