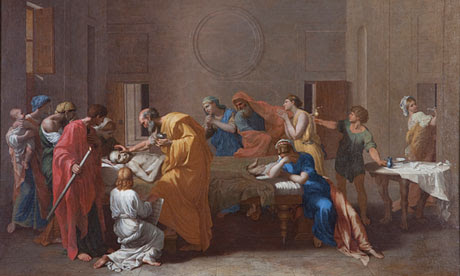 It could be a scene from the 16th century at the height of the Reformation when Catholics paid for their Faith with their lands and goods and, often, with their lives.

But it's not, this scene is of recent times and is, almost certainly taking place at present.

This is not a sinister scenario, however.  At least, no one is going to die as a result of their Faith; rather, someone is about to die fortified by the Last Rites of Holy Mother Church.

The traditional rites, that is. Orthodox, original and unchanged from pre Vatican II days.

The dying person in question is a Catholic priest; a member of the Bishop's staff he has kept his love of the old rite of Mass a secret in the knowledge that, if he was found out he would, indeed, be persecuted. Not by Richard Topcliffe and Co., torturers of Catholics in Reformation times but by his own Bishop.

Of course, he would not have been racked for days on end but he would probably have met with derision and scorn from those who should know better.

He would also, quite probably been given the heave ho from his post (and meagre salary) and pension and despatched to some convent run by the Sisters of Marks and Spencers - all twin sets, pearls and brillo pad hair dos. Aaargh!

But, back to the scenario, in fact, a real life scene that took place, well....some time in the past 20 years or so.

The heavily muffled figure is himself a Catholic priest, taking the Sacrament of Extreme Unction to a dying brother priest; a work of some considerable love as the journey will have taken the ministering priest over 6 hours by road.

I cannot name the Bishop for fear of litigation but he has been a constant scourge of any priest who displayed any traditional leanings.
His Diocese lies to the north of the Watford Gap.

It is nothing short of scandalous that such subterfuge is necessary; please pray for the priest who administered the Sacrament; he is nearing the end of his life and will shortly reap his eternal reward.