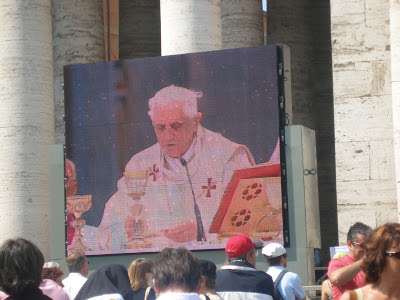 The Holy Father is watching you Eccleston Square!

I have received some up to the minute information on goings on in Rome and, in particular, how Rome views events in England and Wales.

I am not going to disclose my source for obvious reason.

This information is not tittle tattle or gossip; it is the observation of an eye witness; one who has seen and been told certain facts at first hand.
I am sorry for this build up, I do not wish to make this all sound pompous and cloak and daggerish but there are one or two people who read this blog with the sole intent of distorting the facts,  spreading dissent and causing concern.

What is more, the observations are not, in themselves, "hot news", rather they confirm the hopes of many of us and will contribute to confounding those liberals who oppose the Church and Christ's Vicar on earth.

And they come from a variety of different sources; those who closely advise, inform and counsel the Holy Father.

1. On several days that my source attended Mass at St Peter's the EF Mass was the one most in evidence (on one day 10 out of the 12 Masses being celebrated were Tridentine Latin Masses).

2. Also, for further evidence of the Pope's guidance towards the hermeneutic of continuity (as if it was needed), on the Feast of the Epiphany, the seven acolytes each brought a vestment to him in preparation for the Mass and he recited the prayers for each of the vestments from the Pontificale Ceremoniale - that's worth a huzzah or two.

3. Rome is particularly watching events in England and Wales with discerning interest

4. Archbishop Mennini is somewhat concerned over the title "Magic Circle", well, not so much the title but more by what it involves - watch out for parcels of fish wrapped in newspaper being delivered to Eccleston Square (that's my interpretation).

5. There is a great deal of interest in the brouhaha surrounding the Soho Masses; there was also great concern expressed when they learnt that they had not stopped but, in all likelihood, been transferred).


So, at times when the future seems bleak, there is always a glimmer of hope on the horizon.

Not that the future for the Latin Mass worldwide is at all bleak, in fact, it is coming back* and coming back in force; led, largely by the young, hungry for real meat as opposed to bread and water. Hooray! Huzzah!

* A link on this tomorrow
Posted by Richard Collins at Monday, January 14, 2013

Email ThisBlogThis!Share to TwitterShare to FacebookShare to Pinterest
Labels: Good News, Good News from Rome, the Latin Mass is back