Signs of the Faith 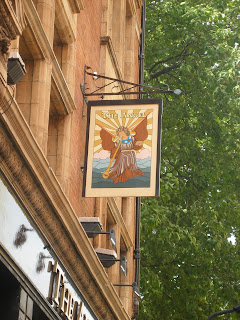 The Angel in London's St Giles High Street, final stopping off point before Tyburn Road aka Oxford Street. During the Reformation period it was known as The Resurrection Gate.

It fell to my lot to be quizmaster at this week's pub quiz at The St Bride's.

An onerous task where you spend all afternoon researching the questions and then take a load of (friendly) barracking on the night itself.

One round of questions I compiled was on the origin of Pub signs, names if you will.

I must admit to my own ignorance here, and was somewhat surprised to find that many of the pub signs in Britain actually owe their origins to the Catholic Faith.

They are as follows:-

The Ship and Anchor - refers to the ark and the anchor of the Church, the Pope.

The Bull - not the animal but the Papal insignia

The Bell - apparently local breweries sprang up alongside churches to provide for the churchgoers, a practice that faded away with Protestantism

The Star - being the star of Bethlehem

The Cross Keys - the keys of St Peter

The Hole in the Wall - a reference to a monastery nearby where food and goods were delivered and paid for via a hole in the wall system.

The Hope and Anchor - takes its name from Letter to the Hebrews:

"We have this as a sure and steadfast anchor of the soul, a hope." 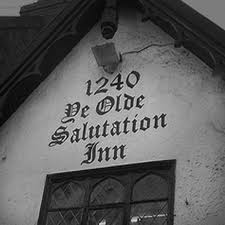 The Salutation Inn - referring to the Annunciation

The Three Crowns - the Magi

The Lion and Lamb, the lion representing the resurrection and the lamb being, Christ Himself.


Many more inn signs would, of course, have been changed during periods of persecution and many more exist that are named after leading churchmen of the day. In my youth I used to enjoy a drink and a meal at The Stephen Langton in Surrey, named after a Catholic Archbishop of Canterbury who was in post from 1207 until his death in 1228.

And then, of course, we have The Square and Compass...ahem, much beloved by those who attend on the great master architect, our Freemason friends.
Enough said.