Seven Up! The week's top posts 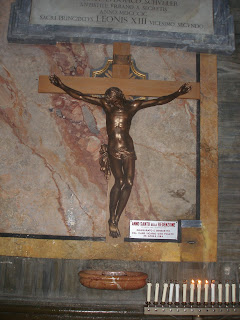 1. Suffering should be regarded as a gift from God; but there are many types of suffering and to be the parent of a child with a disability must rank as being close to the top of the list - hard for both parent and child.
Making Things Visible carries a post with a message from that inspirational leader, Archbishop Chaput.

2. This week we remembered the 39th anniversary of Roe vs Wade. The day that the earth lost a large portion of its light as we began a more efficient slaughter of the innocents. Anthony Layne marks the day with his usual pithy and punchy approach - a day of shame and repentance.

3. Left Footer, (stout man that he is) has started another blog dedicated to the practice of swimming in the sea, preferably when you have to break the ice to enter in. This should be part of every Bishop's spiritual exercise - heh! heh!

4. The Blog of a Country Priest (good title) carries a post on how one cannot convert people to the faith by argument; something that I heartily agree with but, often fall by the wayside in following.

5. A new blog (for me) and one that I stumbled across on the Guild of Blessed Titus Brandsma blogsite. Ethelredasplace carries a good post on the dangers presented by the "games" industry - more like "occult" industry.

6.  James Preece never fails to hit the target and score a  high impact. His post on Dangerous Emissions and CAFOD is bullseye material, read it HERE

7. The threat of Islam. Is there a country in the world that has a Muslim base and that does not persecute Christians - can't think of one offhand.
EF Pastor Emeritus  (I almost typed Emiritus!) has yet another tragic story of how nuns cope with rampant discrimination by Saudi emigres.

And if we had an eight day week, I would award Signor Mundabor a gold star for his great post on niceness. We all live in a nice society where everything is very nice...trouble is, the inhabitants of Sodom were nice also - and look what happened to them.
Posted by Richard Collins at Friday, January 27, 2012

Email ThisBlogThis!Share to TwitterShare to FacebookShare to Pinterest
Labels: Top of the posts, Week's best blogs