It's the keys stupid!

According to the Houses of Parliament Chairman of the Speaker's Advisory Council, one Dr Jonathan Drori,  the great British public is "put off" by the iconography of Parliament, namely the portcullis motif.

Dr Drori states that the logo is "hardly welcoming" and even describes it as "intimidating".

If that works for Parliament.......then it must work for the Catholic faith!


So it seems that people are not put off the faith by....

Papal infallibility......Or the ban on  priests of the female gender...... 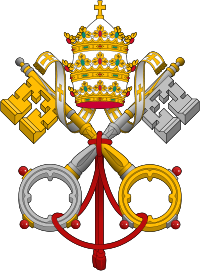 Of course, come to think of it, the Papal Coat of Arms is so very intimidatory with its iconography of the crossed keys (so ominous, keys).

Keys represent authority and discipline, restraint, even. They are a symbol of authority, of opening or closing, binding or loosing - very offputting.

So, I hope that those in the Vatican who are responsibe for such things will give priority to removing the key image and replacing it with something much more user friendly, a smiley face perhaps?