These were among the last words uttered by Blessed Alexander Briant as he faced execution together with St Edmund Campion on 1st December 1581. Aged barely 25, he was known as "'the beautiful Oxford youth' - because of his handsome appearance and general air of holiness.

A convert to the faith, he entered the seminary at Rheims and returned as a priest to his native Somerset in 1578. 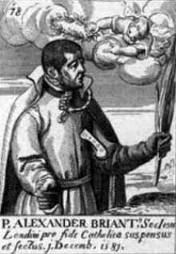 As with the other martyr priests, his ministry was not to last long. He was caught up in 1581 and committed to the Tower of London where he was subject to unspeakable tortures.
When he stood trial in Westminster Hall he took with him a crude crucifix he had made from scraps of wood with a charcoal drawing representing Christ. When Protestant ministers demanded that he throw the cross away he responded: "Never will I do so for I am a soldier of the cross, nor will I henceforth desert this standard unto death".
Finally they wrestled it from his grasp and he then uttered the immortal words: "You may tear the cross from my hands but you cannot tear it from my heart"
He mounted the scaffold with great joy and a beaming smile on his face in the company of St Edmund Campion.
As the words of the Miserere were spoken by him the cart was drawn away.......