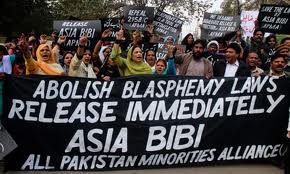 Currently in jail  and facing possible execution under Pakistan's cruel and unjust blasphemy laws, Christian woman, Asia Bibi could be freed pending international lobbying on her behalf and a petition appeal for clemency as featured by Fr Ray Blake and Porta Coeli.
Now, a more sinister element has crept into the picture (according to CNN). Leading Muslim agitator and cleric, Moulana Yousaf Qureshi has offered a cash prize of 6,000 US Dollars to anyone decapitating this innocent woman upon her possible release.

"I will pay a reward of 500,000 Rupees to any loyal follower of Mohammed who beheads Asia Bibi" Qureshi declared in front of a crowd of hundreds of followers.
This sum is more than six times the annual average wage in Pakistan and likely to prove attractive to many Muslims (many, I suspect, would be happy to kill the 45 year old wife and mother for nothing).
Posted by Richard Collins at Friday, December 10, 2010