Alpha is not better (ouch!) 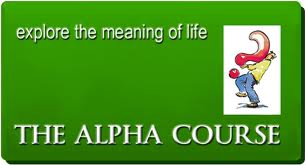 I was coming out of the London Oratory recently on one of my rare visits to London when the heavens opened and I leaped into a handy taxi.
The cabbie was a sterotype of his kind, cockney, earthy and direct.
"You just come out of there Guv" he said, indicating the rapidly vanishing Oratory entrance. "Yes, why?" I responded.
"You was in the wrong place" Came the response. "You shoulda been in there" At that he pointed in the direction of The Holy Trinity Anglican Church, also in the Brompton Road.
He then went on to say that he was doing the Alpha Course for the second time  round at "the Trinity" and advised me to do the same. We finally parted on good terms (of course) but I did feel that I should know more about Alpha just like I sometimes speculate how little I know about Jehovah's Witnesses - something one should know but never gets around to reading  up.

Well, I googled Alpha extensively and am left with the conclusion that it is hard to pin down, a bit like candy floss, rather sweet and frothy but elusive. Nothing to get your teeth into. Finding a few online accounts of non Christian bloggers who had 'done' one of the courses it seems that you can go in at a number of levels.....the committed but ignorant go in at GCSE level while the more erudite might pitch in at A, UG or even Post Grad level.
But, what I read did not excite me in the same way as RE delivered by Sister Oliveria excited me. The holy Sister covered the history and geography and socio political structure  of the Holy Land, the Gospels and Epistles, Parables and Apologetics - and I was only 12 years old! That's the Dominicans for you!
So, next stop it's got to be the JWs..............who, according to a couple who appeared on my doorstep a few weeks ago are Christians. Mmmmm......so I asked them if they believed in the Divinity of Christ.............err, not actually Divinity "but he was a very good prophet."
Posted by Richard Collins at Monday, December 20, 2010