One of London's leading Catholic schools, The Cardinal Vaughan Memorial School, appears to have lost a battle to retain control of its own Governing Body.
The School has been in a long running High Court battle with Westminster Diocese over the control issue and, in September,it secured an injunction effectively barring the way for the Church to appoint School Governors of its choice. 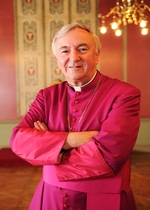 This issue of control screens mainline concerns such as control of admissions and the School Chairman of the Board of Governors, Sir Adrian Fitzgerald is concerned that new admission policies would prevent the School from enrolling pupils from a committed Catholic background.
In an extract from a report in The Daily Telegraph, Sir Adrian stated  that the Cardinal Vaughan School is no longer allowed to favour:

Despite repeated meetings with Diocesan Education Director, Paul Barber and Bishop George Stack and all the legal wranglings it appears as if might is right and the Diocese can claim victory.

The views and opinions of the Headteacher, Governing Body, West Middlesex parish priests, parents and pupils count for nothing; from now on the School will have to admit all and sundry and the whole Catholic ethos of the School stands to be lost in a swamp of political correctness.
Back in January 2009,  Damian Thompson quoted an anonymous priest as saying:


“What is the point of having Catholic schools, supporting and encouraging the Catholic life of the parishes, if they are going to be filled with children who are not a bit interested in the Catholic faith? It would appear that the only criterion is to be baptised. Or perhaps the diocese is going all the way and making the school multi-faith.
“I have never come across such a spineless, lily-livered bunch as our bishops – they just don’t want to stand up for anything that might cause offence. I think Cormac wants to leave the diocese the same way he arrived: covered in confusion and embarrassment"

What sort of organisation takes one of its own to court seeking to impose a Stalin like control over a high quality, sound, Catholic School? - Westminster Diocese!

Parents at the School are now considering an appeal but desperately need support. Email Archbishop Vincent Nichols  at:- abhreception@rcdow.org.uk to voice your disapproval and copy in Anna Arco annablog@catholicherald.co.uk at The Catholic Herald (I hope she will not mind but it does help give the press a handle on how much opposition there is out there).

PLEASE DO THIS AS A MATTER OF URGENCY - WE NEED TO KEEP OUR SCHOOLS CATHOLIC!
Posted by Richard Collins at Wednesday, December 01, 2010