I never have liked trial by media or the lynch mob mentality.
They smack of insecurity, self guilt,of bullies and cowards. 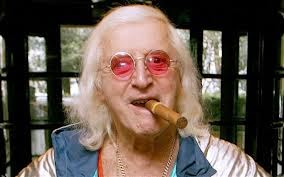 I've never liked Jimmy Savile either. Too much corny ooohing and aaahing for my money.

But it needs to be said that we cannot judge this man even if there is a growing wave of accusations from those who allege abuse by him. He is not here to present a defence.

He is dead and will by now have faced the most important judgement that any of us will receive.

It was wrong of the senior police officer who, when interviewed, described him as a "sexual predator".

If Savile was still alive such language would have rendered a potential trial null and void; we have only heard the voices of those in the defendants' box, we cannot hear the plaintiff's account.

Time for all those tabloid newspapers to stop their cant and hypocrisy and to look at removing the 'page 3' models instead.
Posted by Richard Collins at Wednesday, October 10, 2012