What follows are extracts from a letter written by a Parish Priest to his Bishop.

It concerns the Aberystwyth issue; that of a 19th century church building sitting on a valuable plot of land. The Bishop wishes to sell off the land and  build a new church some way out of town but the bulk of the parishioners wish to stay in town in the old church.

This battle is almost becoming a metaphor for the liberal vs traditional struggle although, the majority of the parish members would, I am sure, be classified as modern Catholics. 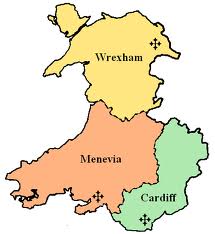 Key to the issue is an alleged report commissioned by the Diocese that is said to condemn the old church as dangerous and unsafe (sound familiar?). The Parish Priest has written the following letter tendering his resignation as a trustee of the Diocese of Menevia and asking to have sight of the report.

Although the letter is addressed to his Bishop, the priest, Fr Evans, distributed copies of it to all of his parishioners and a copy was passed on, in due course, to me.

The regional newspaper has featured parts of the letter but, I believe that it is important to read it more or less in its entirety; that way you will receive a sense of the priest's even handedness in approaching the problem (if, in fact, there is no other course of action other than to demolish the old and build the new then he will abide by that decision).

With regret I write to proffer my resignation from the Board of Trustees of the Diocese of Menevia......

......As you know, I have been unhappy about the failure of the Trustees to adequately address, with conviction and resolution, other possible solutions to the problems facing us in Aberystwyth.

(i) To sell the land in Penparcau (the new proposed site) (retaining a plot of land for any possible daughter church in Penparcau) and use that money, possibly with help from lottery funding and/or other sources, to repair the church and presbytery in Queen's Road.

(ii) Reluctantly (if an objective assessment and structural survey demand it) to pull down the existing church and presbytery and rebuild on the same site. (Keeping it within town limits and accessible to the elderly and infirm).

(iii) Otherwise to seek to purchase an existing redundant church, chapel or hall (there's a few of those in Wales) in the town so that the Catholic community can remain centred in Aberystwyth.

(iv) The sale of the land in Queen's Road and Penparcau to build a new church in Penparcau (I believe Fr Evans means this as a last option, that of pooling monies from both sites and re-building anew out of town)

Unfortunately the perception exists that the Trustees have from the beginning pursued with conviction and resolution only the last (final) option. Of course it may well be that, in the end, this last option proves to be the only option left to us (even if not the best option), and so there will be no choice but to knock down the present church and presbytery and build new in Penparcau.

However, for the sake of justice, transparency and truth it is important that the trustees should be seen to have explored the other options with an equal conviction and resolution with which they appear to pursue only this one (last) option.
It remains my view that the preferred option is for the Catholic in Aberystwyth to remain based in Queen's Road.
Aberystwyth is arguably the capital of Welsh-speaking Wales (certainly it is at the heart of Welsh-speaking Wales),and it is the home to the national Library of Wales, the Centre for Celtic Studies as well as a major Welsh University.
The symbolism of the Catholic Church withdrawing from the capital of Welsh Wales, coupled with the woeful provision of the Welsh language - (no provision for a Welsh Catholic to be baptised, married or buried in his/her own language) - would, inevitably reflect badly on the reputation of the Catholic Church in Wales (I might add that there are no Latin Masses in this part of the Diocese either).

....I repeat that, in the end, we may, despite all the arguments to the contrary, have no choice but to rebuild in Penparcau, but I do not feel that as Trustees we have taken seriously, and pursued with conviction and resolution, the preferred options and solutions to the problems we face in Aberystwyth."

And, here are a few more words to ponder upon:-

"........... For, these are not easy times to live in. Unemployment is over 8% at 2.62 million in Britain, and the average level is higher here in Wales. The economy is faltering. Governments struggle to resolve the Euro-debt crisis. Those allegedly responsible for it still seem largely unrepentant. Meanwhile, many people among those who are the worst affected suffer in silence, often faced with desperation and hopelessness, the innocent victims of rash policies and the over-reaching ambition of others. Where is hope in this? Where is God?  St Paul provides the answer: Real hope is in things unseen. Sometimes we confuse it with expectations about what we want.  In fact, hope is the very essence of grace. It brings freshness and courage. It calls us to be awake to welcome the unexpected. Out of the depths of despair and anxiety, the unforeseen can emerge".