The 'Twelve Days of Christmas' Carol is seditious!


How can a beautiful and harmless carol be deemed seditious? Well, it was the case in times past when Catholics were either actively persecuted or discriminated against in Great Britain.
'The Twelve Days of Christmas' was a code for teaching the faith.....here is the story and explanation:-

THE MEANING OF THE TWELVE DAYS OF CHRISTMAS
What do we mean when we sing ‘3 French hens’ or ‘Nine ladies dancing’?
What has it got to do with Christmas?
It dates from the period 1558 to 1829 when Catholics in
and Wales were not permitted to practice their faith openly. Someone, during this era, wrote this Carol as a Catechism song to aid young Catholics in learning their faith.
The Carol has two levels of meaning; the surface meaning plus a hidden meaning known only to members of the Catholic Church. Each element of the Carol has a code word for a religious reality which the children could remember. 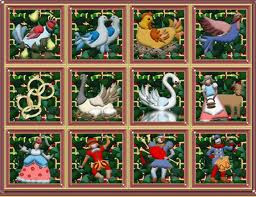 Email ThisBlogThis!Share to TwitterShare to FacebookShare to Pinterest
Labels: Carol, The Twelve Days of Christmas