Nil by hand at the Vatican

H/T to Robert Kumpel for his report on a new emphasis given at the Vatican to receiving Holy Communion on the tongue and only on the tongue.
Now, I know I do bang on about this issue but it is of fundamental importance to our faith today. The lack of reverence for the Blessed Sacrament leads to a lack of belief in the actual Body and Blood of Christ and an alignment with Protestant theology which claims that we are only re-enacting a symbolic 'meal' and that the host is still bread and the wine still wine. 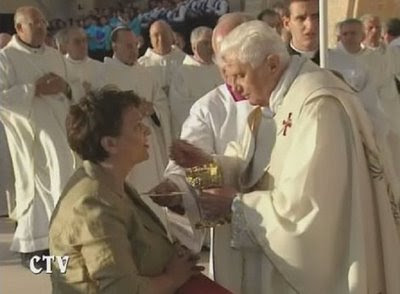 from What Does the Prayer Really Say? (Fr. John Zuhlsdorf's blog)

I was not able to watch all of the Papal Mass in the Vatican Basilica, but I have started to get interesting emails about something people noticed.

Among them was this email from a priest in Rome:

In a change to former practice, those distributing Holy Communion at
the Holy Father’s Mass tonight were told that ‘at all Papal Masses
Communion is to be given only on the tongue.’ The usual statement that Prelates receive in the same way as the Laity remained.
thought you might be interested.

One of the emails from people watched the Mass said:

Did you notice that during the communion of the faithful during Pope Benedict’s Midnight Mass at least one priest refused to give Holy Communion on the hand? Instead, the security guard near this priest motioned for each communicant to receive on the tongue. If the communicants didn’t get the hint, the priest still did not give them the Host in the hand, but rather held It near their mouth until they finally understood. Some of the people looked very surprised when they held their hands out and didn’t get the Host.

This was apparently noticeble during the broadcast.

This is way it is going to have to be done. Example… then buzz buzz buzz… then people will catch on and, over time, things will shift to a point where the change back to the NORMAL manner of reception of Communion can be effected without as much upheaval.

According to Church Law, THE WORLDWIDE NORM FOR RECEIVING HOLY COMMUNION IS ON THE TONGUE.

Reception of Holy Communion in the hand is only by indult to specific countries, petitioned for by the various bishops conferences. An indult is a SPECIAL PERMISSION or PRIVILEGE and, as such, can be revoked by the Holy Father at any time.

And every Catholic in the United States deserves to know that this indult was obtained by dishonest means by the U.S. Conference of Catholic Bishops.

We continue to pray for a restoration of the norms: The norms of sacramental discipline, the norms of liturgical practice and the norms