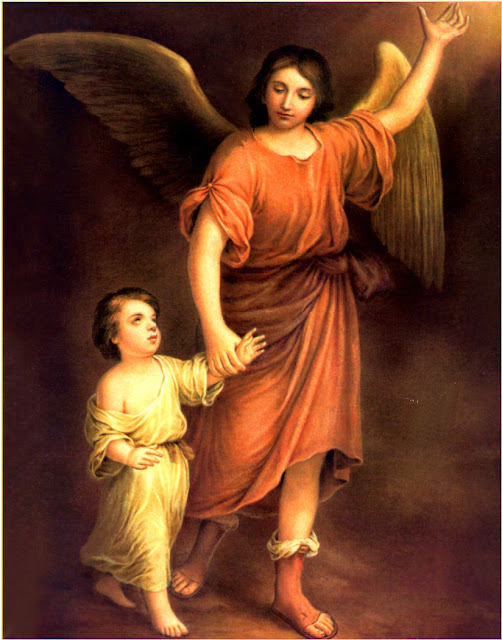 Guardian Angels - not just for children


This question was posed for me by Madame Linen whilst discussing a certain young man of our acquaintance.

"His trouble is that he is not engaged with his Guardian Angel" was Madame's comment and, the more I thought on it, the more accurate she was in her assessment.

But Mme had also struck pure gold in touching upon a topic that is often close to my heart; that of my own relationship with my Guardian Angel (or GA for short).

I, along with many of us, I suspect, tend to ignore the presence (for that is what it is) of our own, our very own, GA.

We often forget that the good Lord has endowed us with yet another arrow in our quiver in the form of an angel totally and utterly dedicated to our well being.

The trouble is, we are so bound up with life in a neon lit, fast food treadmill, that we overlook this important presence in our lives, this all important vital aid (and aide) sent by Almighty God to look over and care for us while we wallow around in this awful environment we call the world.

We do not, in Mrs L's immortal words, "engage with our Guardian Angel" often enough, if at all.

The Bushmen of the Kalahari desert have a belief in a 'being' that we might call God and their 'god' sends them messages, so they believe, by means of a tapping or an inner voice. They are attuned to this 'tapping' and respond accordingly, as best they can without the privilege of knowledge.

I believe that our GA is the source of the 'tapping' and, if only we could tune in to this wavelength, we would save ourselves a great deal of bother and inconvenience.

I think that I may have heard it on a few occasions and, very occasionally have been fey enough to respond.

The first and somewhat tame incident, was when driving along a main suburban road between Staines and Laleham.

I was but a callow youth and had a tendency to go a shade heavy on the accelerator (gas) pedal. I had not given my GA a second thought since leaving the warm embrace of a Dominican education some ten years earlier and was proceeding quite swiftly on my way.

As I approached a wide bend a sudden thought came into my head.
Unexpected, and not entirely understood.

It was a thought that actually said: "Guardian Angel says to slow down"

So incomprehensible and yet commanding was this 'tapping' that I braked and slowed the car to within the speed limit.
And, within two or three seconds I found myself driving through a police radar trap. Phew!

Now this was not a life or death situation. I was wrong to have been speeding but a fine of a few pounds would not have been the end of the world. So why?

Cynics will say that it was a cognitive response to earlier indoctrination. Maybe.

But, it has happened a few times since, perhaps not more than on three or four occasions.

I do not think that my GA has been idle so much as the fact that I have been so top heavy with secular issues that I have failed to hear the 'tapping' message.

Those who are not of the Catholic Faith (and even a few more liberally minded Catholics) may think that I have been indulging too much in the amber liquid, but that is not the case.

After all, it would be a pretty fruitless exercise for God to endow us with a guardian who then did nothing to actually guard us.

Our angel is there for a purpose; to enlighten and protect, to direct and govern.

When we left home for our Saturday Vigil Mass last weekend, a neighbour stopped us in our tracks to chat about sheer trivia.
I kept cool and gently revved the car and, after 2 minutes she released us from a debate regarding the weather and we proceeded some 50 metres to a t junction.

Two cars were locked in a smash there and the badly shaken and bruised occupants were climbing out to assess the damage.

The crash had taken place one minute before our arrival at the t junction and, if we had not been delayed, we might well have been involved.

Of course, some will say that this incident proves nothing in terms of a Guardian Angel's protection, but I know better and I said my GA prayer with even greater fervour that night.

I have been glad of my GA's protective influence with regard to some rather more dramatic moments in my life but that knowledge rests between my GA and me.