Father Thwaites SJ and a travesty concerning his Requiem

Most people will have heard by now that the much loved and admired priest, Fr Hugh Thwaites, a man who, for all of his priestly life, celebrated the Tridentine Latin Mass, is to be buried at a concelebrated Requiem Ordinary Form Mass. 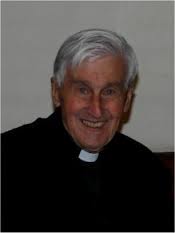 That is a cruel trick; a vile and nasty attempt to wipe the eye of a dead priest.

Dare I say that it is typical of many liberal Catholic priests and laity alike.

The LMS claim that they feel certain that Fr Thwaites would have held a Society 'card' stating that the holder wishes to be buried according to the Rites of the Extraordinary Form of Mass.

That is not enough to guarantee that this will happen.

I have seen many good traditional Catholic friends, who would not have attended a Mass in the Ordinary Form if you had held a gun to their head, being assigned to the Novus Ordo after their death.

What is needed is for one's last will and testament to contain the wish to have a TLM Requiem Mass - with no deviation or exception.

That will ensure that you receive the required graces that a Latin Mass carries.

Juventutem London has a Facebook petition for Fr Thwaites (whose burial is tomorrow, I believe).
NB: I have since been informed that this page has nothing to do with JL although I did receive an email from them purporting to be running a petition. It does show that Facebook cannot be trusted.

Piers Darcy also suggests emailing the Head of the Jesuit Order in England and Wales; here are the details:-

A number of you have responded to my message (below) expressing 'disquiet' about the fact that Father Thwaites' wish will be frustrated. I would suggest that you send a 'nice' message to the Jesuit Provincial at  curia@gbsj.org  His name is  Father Dermot Preston SJ