Church to close in 10 days time

An 800 year old church, once Catholic, is to close due to a dwindling  congregation. 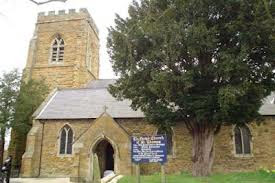 The church of St Thomas a Becket, in Haverfordwest is one of three Anglican churches in the small town, population c. 13,000 and it shows clearly some of the beauty inherited from its Catholic past (although, undoubtedly, it was all vandalised by Henry VIII's hooligans, it was restored, in Protestant hands to a little of its former glory).

Built in 1225 it is mentioned in one of King Edward III's charters and its boundaries are described as:

".....and also of the land from the West gate of the cemetery of St Thomas as the main road leads to the market as far as the Lepers Land and thence as far as Little Haverford" (now known as St Thomas's Green).

At that stage, in the 13th century, Haverfordwest was a hub of commerce and seatrade and boasted two monastic communities, the Dominicans, God bless them and the Augustinians, and God bless them also.
You see, Wales was a Catholic country then and the Faith percolated through the social world and touched the hearts and souls of all - from the diseased leper to the Lord of the Manor.

For 700 years, Catholics were baptised, wed and buried at this beautiful church although no historian these days will admit to its Catholic heritage, such is the way of the world in Protestant Britain today.

And now? Now it looks like this fine building is redundant.

What will happen to it?

Here is my forecast. It will be boarded up and left for a few years so that the Pembrokeshire wind and rain gradually penetrates further into its fabric.
Then a few drug addicts will migrate from the churchyard and set up their hideous practice there until, in time, it has become such a shambles that the Council steps in and launches a plan to save this historic 'monument'.

Then funds will be sought from the Welsh heritage organisation, CADW, to restore the building sympathetically (but incorporating a block of apartments for the well off in Pembrokeshire society).

And that will be its inglorious end.

But....I have a cunning plan. In fact, it is not so much cunning as eminently sensible, feasible and economically sound.

If the Catholic Church, in the form of Menevia Diocese, was to purchase this church and relocate its current parish church of St David and St Patrick there (not very good architecturally, one half of the church is faux gothic and the other half faux car park) then we would have gone a little way to bringing the Catholic Faith and all its richness, back to this corner of Wales. Huzzah! We would all say.

The Diocese could sell off the old church site for it to become the mandatory block of apartments and, with the money, restore St Thomas's Church which, I guess it could purchase from the Church of Wales for round about 50 pence.

And of course, if the Bishop of Menevia would really like to respond to Summorum Pontificum as all good Bishops should, then he might consider 'gifting' this fine old church to the FSSP or the Institute of Christ the King - what a triumph that would be.

The Mass of all Time restored to its rightful place after a 500 year absence.

"To blog perchance to dream"