No greater love hath a woman... 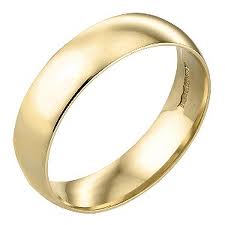 The Ring of the Lord

....than to surrender her wedding ring as a literal immolation so that its precious metal may be re-fashioned into a chalice, monstrance or ciborium to be then consecrated by a Bishop and used to contain the Sacred Species.

This was once a fairly common practice; my own mother gave up her wedding and engagement rings for that purpose when Campion House was in the process of being established and there was a need for altar vessels. So did many other women around Great Britain. Campion House was a seminary for late vocations and a highly successful one it was until the decay set in - you can guess the rest.

Now it's probably a Tesco carpark.

But, in the light of the Ramsgate scandal it is good to know that this great sacrifice is still treasured and commemorated by the parishioners of a shrine to Our Lady, North of the Border, at Our Lady of Carfin to be precise.

Now, due to Carfin's copywright restrictions, I can only direct you to the website which you will find HERE

The details are a little imprecise as the impression is given that this is a fairly recent event but, then you read that Pope Pius XI blessed the monstrance (in this case the women of Scotland gave up their jewellery for this most precious vessel, reserving the wedding rings for the part of the monstance that holds the Host). So, with a little bit of what used to be called arithmetic, I estimate that it must have taken place about some time ago.

Anyway, the Church of St Francis Xavier and Carfin Grotto would be a must if you are venturing North of Watford on some jolly or other.

While monstrances are the topic of the day I recall a story told by a Catholic priest friend about a non Catholic attending Benediction.
Afterwards they asked of the priest "What was that you were holding up when the bell rang?".

"It was a monstrance" replied the priest.

"No it wasn't it was beautiful" came the reply.
Posted by Richard Collins at Saturday, February 11, 2012

Email ThisBlogThis!Share to TwitterShare to FacebookShare to Pinterest
Labels: Gossip and Scandalmongering, Monstrances and Chalices, Simony