Could you put a price on the face of a child?

There is a charity called Project Harar Ethiopia.

It is not a Catholic charity, just a charity.
It exists to raise funds and send medical teams out to Ethiopia to operate on the faces of children, maimed by animals (hyenas, in the main) or disease, of which Noma is the most common.

One can imagine the damage caused by a hyena that has the strongest jaws per pressure per square inch of any animal in Africa. Their teeth carry gangrenous bacteria so that, any wound quickly becomes a necrotising mass of infection.

Noma is an acute gangrenous infection affecting the face.
Its victims are mainly young children living in extreme poverty, chronically malnourished and with little access to medical care.
Some 90 percent die within weeks of contracting this terrible disease, and survivors can be left severely disabled.
The disease was eradicated in Europe and North America a century ago, save for outbreaks in Nazi concentration camps.
However, it persists in the world’s ‘noma belt’ -  countries, such as Ethiopia, which border the Sahara and have high levels of malnutrition and poor access to medicine.
Noma develops when a child’s antibodies that normally fight external viruses become 'confused'. They turn on their host body, attacking the soft tissue of the cheek, mouth and nose. The World Health Organisation estimates that there are approximately 770,000 survivors of noma, with 140,000 new cases per year.

Survivors are left scarred and disabled.

They are frequently unable to eat or speak normally, and confront great social stigma.
Many individuals with a facial ‘difference’ are ostracised by their communities, and many of our young patients are denied their right to a school-place or even abandoned.
Our patients come from poor, remote regions of Ethiopia, where there is little prospect of treatment without outside help.

I have not included any emotive pictures with this post, other than the one below. 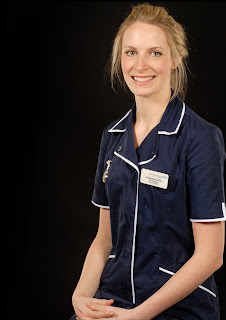 This is my youngest daughter. She is a nursing sister and she has given up all of her leave this year to either raise funds or, in this instance, to travel out to Ethiopia as part of a team carrying out remedial maxillofacial surgery, usually in draughty tents that serve as operating theatres.

How does this square with all the other demands on your purse or pocket?
There are many good Catholic charities, countless good causes, there is Medecin san Frontieres, Aid to the Church in Need, Oxfam, CAFOD (hmm) and a hundred other organisations both at home and overseas.

So I really hesitate at asking any more of you.

My daughter would love, above all else, your prayers.

But, if you do wish to donate to the expenses incurred in getting her team out there, then may Almighty God bless you.

This is where you contribute: http://www.justgiving.com/Project-Harar
Posted by Richard Collins at Thursday, February 16, 2012