In Flanders the poppies were red...let's keep them that way

The First World War was, arguably, the worst man-made holocaust the world has ever seen.
Constant shelling, gun batteries drawn by mules and horses, heavy supply wagons and  men by the hundred thousand, all created a battlefield that was a swamp of mud with bodies lying several feet deep in some places.

Picardy and Flanders were the areas most devastated but, in the midst of what must have been a foul smelling Spring time, red poppies sprang up across No man's land - the only vegetation to grow under those conditions. 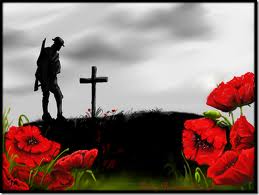 The shedding of blood symbolised by
the red poppy
Ever since, the red poppy has become a symbol of the fallen war dead or those incapacitated by war.

It is used as a means of fund raising by the Royal British Legion and the cash raised from the sale of poppy badges goes to provide for the welfare of the men and women of the armed forces who have fought on our behalf and who are now suffering as a result.

A few years ago a group of CND types and Quakers introduced a white poppy as a counter to the red.

And now the white poppy campaign is slowly gaining momentum and this just must not be allowed to continue.

Offered under the strapline "White poppies for a culture of Peace" the campaign carefully inserts the innuendo that a red poppy must stand for war.

That is, of course, just not true.

The red poppy and all the ceremonies and church services surrounding Remembrance Sunday are aimed at helping us to remember the sacrifices made on our behalf; they do not ever 'glorify' war.

The white poppy exercise is, I believe, a pacifist manoeuvre and I hold no respect for pacifists who abstain from their duty at times of national crisis.
It is also unclear as to where the cash raised from white poppy sales goes to.


This is the famous poem by John McCrae.....


In Flanders fields
In Flanders fields the poppies blow
Between the crosses, row on row,
That mark our place; and in the sky
The larks, still bravely singing, fly
Scarce heard amid the guns below.
We are the Dead. Short days ago
We lived, felt dawn, saw sunset glow,
Loved and were loved, and now we lie
In Flanders fields.
Take up our quarrel with the foe:
To you from failing hands we throw
The torch; be yours to hold it high.
If ye break faith with us who die
We shall not sleep, though poppies grow
In Flanders fields.
﻿
So this year, wear a red poppy as a token of gratitude to those who gave their lives, limbs or good health as a sacrifice on our behalf.

A Missa Cantata will be held at the Church of St Therese de Lisieux, Sandfields, Port Talbot on Sunday 13th November at 5pm.