How do you evangelise a Zombie?

I have worked, during most of my career with young people aged from 16 years of age up to 24 and beyond. They came from all sorts of backgrounds and had all sorts of beliefs or none at all. 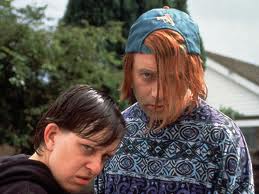 A third of them were excellent students, well behaved and diligent. Another third were just there; they existed, they scraped through their assignments and they finally passed through the system (I can identify with that sector, I was like that in my time so don’t give up hope on them  completely).
The final third are the walking dead; some College staff referred to them as “the knuckledraggers” – what unkind person could have used that phrase?
But, it was true. They grunted at times, they were, largely, unwashed, they could not actually string a sentence together and they could not hold a knife and fork.
They could not tell you who Churchill was let alone Jesus Christ.
Amazing but true.
The problem is, of course, that these are the children of the latch key kids generation.
Their parents came home after school (if they ever went there) to an empty house, not a home.
Food came from the freezer and was microwaved to an instantly edible mush. It was consumed in front of the television (porn videos from under dad’s side of the bed?) and it was eaten using only the fingers. Easier and it saved on the washing up.
If you think that I am painting a damning picture, you are right. But it is also true. And this is the next, evolved generation. The generation that are adept at playing computer games for 12 hours at a stretch, the generation that has lost the art of communication.
Now as Catholics we have a mission in life to lead others to Christ. Not in a Jehovary sort of way, that is crass. Not in a Protestant TV  evangelical sort of way, they wouldn’t watch it. And certainly not in a happy clappy, cheery wavy, Catholic charismatic sort of way. That way only fools the charismatics.
The Holy Father has charged the Bishops to evangelise in 2012 but I’ll bet you a meal for two at McDonalds that no attempt will be made to make contact with the massive numbers, possibly hundreds of thousands that I speak of.
Why? Because it’s hard. Because the number of clergy the Church has that are versed in communicating with young dissidents does not run into double figures, because the ideas cupboard is bare; not only bare, the Bishops have forgotten that it ever existed!
We need new ideas, new ways of approaching this group. They are so tragic, sleepwalking to Hell. They need saving.
But who will save them?
And more to the point – how will they be saved?
Watch this space for some attempt at answering this troubling situation in a few days time.
Posted by Richard Collins at Wednesday, November 30, 2011