An English chapel and a bottle of water from Wales

Today, November 3rd is the feastday of St *Winifred of Wales, or, in the Welsh tongue, Gwenffrewi Sant.

A noblewoman of the 7th century she rebuffed the advances of a local by the name of Caradog as she wished to remain chaste and to dedicate her life to Almighty God as a nun.
According to the records, Caradog was enraged at being thwarted in love and he took his sword and decapitated the young woman on the spot.

Life in Wales was pretty bloody in those days and Winifred's brother, Owain, sought and actually killed Caradog in a violent act of revenge.

Now the tale becomes somewhat twisted as some accounts state that the young saint  was then restored fully and her head rejoined to her body by her uncle, Saint Beuno. Other accounts state that she made a pilgrimage to Rome and became Abbess at Gwytherin in North Wales.

She is the patron, obscurely of payroll clerks and, more obviously, of virgins.

Where her head had fallen a well sprang up and was found to have a curative effect on the sick and diseased.
It became a place of pilgrimage and remains an important focal point for pilgrims today.

The Latin Mass Society organises a pilgrimage each year in July and the well has earned its reputation as the "Welsh Lourdes".

Now come with me to the English Midlands, some 150 miles or so from Holywell, shrine of St Winifred. 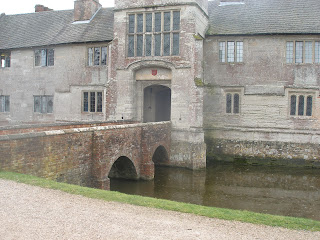 We are entering a small 15th century manor house called Baddesley Clinton, we proceed up the stairs and across the landing to enter a Chapel; one that  was once a Recusant Chapel where priests on the run covertly celebrated Mass for the family and friends. Possibly, even, linen was draped on the hedgerow to indicate a Mass that day.

The Chapel appears, more or less, as it was nearly 500 years ago but, on the window ledge stands a bottle half filled with water. Pick it up, shake it, it is clear as....well, it's gin clear. Not a sign of green algae, yet it has stood in full sunlight for some considerable time, months or even years. 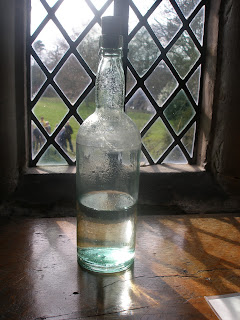 Besides the bottle is a card that simply states: "Water from St Winifred's Well"

I asked several guides for information on the bottle but there was no enlightenment, doubtless, members of the family kept it there to bless themselves with...who knows?

But it was good to find such a poignant reminder of my adopted home in the heart of England.


﻿Prayer to St. Winifred
O blessed Winifred, pure virgin and glorious martyr, so especially chosen, so divinely graced and so wonderfully restored from death to life!
Hope of all that fly unto thee with full confidence and humility!
We, though, unworthy, yet thy devoted pilgrims, make our petitions unto thee. Sanctuary of piety, look upon us with patient eyes; receive our prayers, accept our offerings, and present our supplications at the throne of mercy, that through thy powerful intercessions God may be pleased to bless us, and to grant our requests and desires; through Christ our Lord.
Amen
ST WINIFRED - ORA PRO NOBIS