The actress and the bishop!

Be honest, your thoughts raced down all sorts of corridors when you read that headline, and most of them were pretty murky - correct?


But it is an honest headline, so please let me explain (and many thanks to Liz for reminding me of this true story). 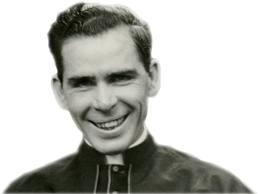 It was London in the late 1920s and Father Sheen, as he then was, had been seconded to teach at the seminary at St Edmond's Ware.
In addition to those duties he became an unofficial curate at St Patrick's Church, Soho Square.

November in London in those days meant being immersed in a dense and foul fog (I don't remember that, by the way, but it was the same in the Fifties).

Fr Sheen went to open the church one foggy morning only to find a young woman of uncertain sobriety in the doorway.

To cut to the point, the good Father engaged her in conversation and made her a cup of strong coffee. It transpired that she was a Catholic and the star of a musical then on the London stage and that she was involved with three men and life had become unbearable for her.

Drink had become her refuge and her friend.

Fr Sheen then asked her to come back the following day when he would show her a painting by Rembrandt and talk with her further.

She agreed to return on one condition; that Father Sheen would not ask her to go to confession.

This he agreed to. but that was not enough. "Promise me that you will not ask me to go to confession" pleaded the actress.

"OK, I promise that I will not ask you to go to confession" said the priest.

That satisfied the woman and the next day, sure enough, she did return.

As they walked up the church towards the sanctuary they passed a confessional and without further ado, Father Sheen pushed her into it!

She made a full confession, the first for many years and, a short time later she entered the community of enclosed nuns at Tyburn and she was still there forty years later when the then Bishop Sheen related the story to his television audience.

As Archbishop Sheen said to his audience: "I didn't ask her to go to confession, I pushed her in"

Many years ago St Patrick's was my parish church and I have a great affection for it, most especially as it has been restored and renovated to a very high standard by the PP, Fr Sherbrooke.

.
The anniversary of his death is 9th November.

May God have mercy on his soul and may Archbishop Fulton Sheen come to the aid of the Catholic Church today.