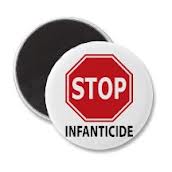 Turning to my missal for today's Feast of The Holy Innocents I noticed, in the prologue, two things that had, either through ignorance or familiarity, passed me by in the past.

The first thing is that the "Innocents" are given the status of martyrs.

Why? They were not Christians in the sense that we speak of being Christian today.

But they died in the name of Christ; it may have been involuntary as far as they were concerned but the fact remains nonetheless.

The second thing to strike me was the fact that the Collect for the day makes note of the fact that "the Innocents, by dying confess".

In other words, the blood of their martyrdom washes away the stain of Original Sin.

Is it then, just pushing the limits of what is meant by"martyrdom" too far to attribute the same absolution for those infants who, today, are murdered in their mothers' womb?

They, too are "innocent" and many of them die, if not on Christ's behalf, then certainly in involuntary support of Catholic doctrine, the teachings of Christ and the revelations of the Almighty.

A voice in Rama was heard,
lamentation and great mourning:
Rachel bewailing her children,
and would not be comforted, because they are not
Posted by Richard Collins at Friday, December 28, 2012

Email ThisBlogThis!Share to TwitterShare to FacebookShare to Pinterest
Labels: Absolution through martyrdom, The blood of the Martyrs, The Feast of The Holy Innocents