Sponsors consider pulling out but Bigot Ceremony goes ahead

If you have the time, the inclination and the money (just £155 will do it) you will just be in time to turn up at the Victoria & Albert Museum (no, really) for the Stonewall Bigot Awards of 2012.

Quite sweet really, the dress requirement is simply listed as 'Cocktail' (no pun intended).

It all kicks off with champers and canapes at 6.45pm before well known (ahem) Television personality, Gok Wan (I love those good old Irish names) starts giving out the Awards.

As the organisers describe it:

Taking place in the magnificent Raphael Gallery of the Victoria & Albert Museum, this year’s Awards exemplify the individuals and organisations which are critical in ensuring a positive representation of gay people in the media today, one of Stonewall’s key priorities.

Guests will enjoy a champagne and canapé reception before moving through for the presentation, hosted by Gok Wan. Winners in ten categories will include Politician of the Year and Entertainer of the Year and will be voted on by our panel of judges – Broadcaster Alice Arnold; Channel 4 News Culture Editor Matthew Cain; England rugby star Ben Cohen; Author Val McDermid and UK Black Pride MD Phyll Opoku-Gyimah.
The evening continues until 10.30pm with more champagne, food and entertainment.

There is one category of award that is causing two of the sponsoring companies some angst; it's The Bigot of the Year Award (I thought those were the organisers).
Two banks, Barclays and Coutts have received a lot of comment from Christian customers (how dare they?) complaining about this rather unsavoury award category (the whole caboodle is pretty unsavoury if you ask me). 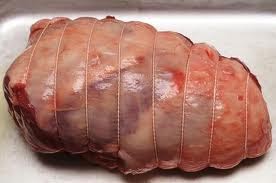 The winner of the Gigot of the Year Award

As a result I believe that they have now withdrawn or thinking of withdrawing from this sad little event.

Good! Well done those who complained and well done Coutts and Barclays, watch out for some pretty nasty foot stamping.

Of course, the main object of Stonewall's ire is our own dear Scottish Cardinal O'Brien. God bless him and protect him from the hissy fits.

I see that there is also a Journalist of the Year Award but to my utter dismay and shock, I cannot see Damian Thompson's nomination anywhere.

It must have gone astray in the post.
Posted by Richard Collins at Thursday, November 01, 2012