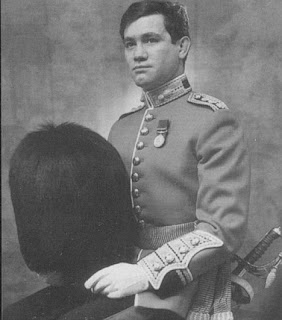 On the night of 15th May 1977, Captain Robert Nairac, a young officer in the Grenadier Guards and seconded to the SAS in Northern Ireland, was working undercover in a well known IRA pub in the Three Steps bar in Drumintee, close to the borders of the Republic.
Despite having the right appearance and accent, Nairac was under suspicion and, as he left at 11.30pm, a group of five men detained him in the car park. Robert Nairac was no stranger to danger; he was capable, strong and confident and it took a hard and bloody fight before he could be subdued and bundled into a car.
He was taken to an unknown place, deep in the countryside and he must have known then that his fate was sealed. The Provisional IRA then formally came into the picture having been alerted by one of the five thugs. What then took place can only be surmised but what is certain is that Captain Nairac was tortured most terribly before being brutally murdered.
His body has never been recovered and the PIRA has never offered any information as to its whereabouts. His family must grieve ever more deeply knowing that they cannot mourn for him at a graveside.
Several members of the ‘’ have been put on trial but the evidence against them has never been enough for a conviction.
Robert Nairac came from an English Catholic family and had a brilliant career ahead of him. His death was a blow to all decent folk but the English Catholic population felt it most keenly; we knew we had lost one of our own. As for the IRA, they never had much of the badge of honour about them, any scrap of a decent element died when Michael Collins was murdered by his fellow countrymen.
Sadly, it was funds from Irish Americans that kept the savage IRA afloat for so long (any IRA links with the Socialist based Irish Republican Brotherhood being conveniently ignored). The IRA spread their poison around the world training and being trained by The Shining Path thugs, Gaddaffi’s henchmen and, of course, ironically, Al Qaeda.
Captain Nairac was posthumously awarded the George Cross in February 1979, his citation reads:-

On the night of 14/15 May 1977 Captain Nairac was abducted from a village in by at least seven men. Despite his fierce resistance he was overpowered and taken across the border into the nearby Republic of Ireland where he was subjected to a succession of exceptionally savage assaults in an attempt to extract information which would have put other lives and future operations at serious risk. These efforts to break Captain Nairac's will failed entirely. Weakened as he was in strength-though not in spirit-by the brutality, he yet made repeated and spirited attempts to escape, but on each occasion was eventually overpowered by the weight of the numbers against him. After several hours in the hands of his captors Captain Nairac was callously murdered by a gunman of the Provisional Irish Republican Army who had been summoned to the scene. His assassin subsequently said 'He never told us anything'.
Captain Nairac's exceptional courage and acts of the greatest heroism in circumstances of extreme peril showed devotion to duty and personal courage second to none.

Eternal rest grant unto him O Lord
and let perpetual light shine upon him,
may he rest in peace. Amen
Posted by Richard Collins at Sunday, May 15, 2011