"Do you think Christ taught in English?"

28th May 1582 is the feast of Blessed Robert Johnson SJ. He won his martyr's crown, as did so many of his kind, at Tyburn. 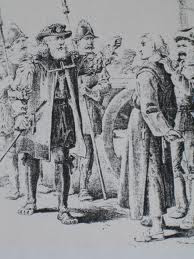 Here is an extract of the account of his life:-

"Born in Shropshire, he became a gentleman's servant, but went abroad and was ordained priest at Douay and was sent on the English Mission in 1576.
In December 1580, after being arrested, he was sent to the Tower of London where he was viciously racked on three occasions. He was sentenced in November 1581 but his execution was postponed until May 1582.

On the scaffold he boldly answered the Sheriff that Elizabeth was as much Head of the Church as Mary had been. The Sheriff replied:"Thou art a traitor most obstinate".
Bl Robert replied: "If I be a traitor for holding the faith, then all our kings and queens and all our ancestors were traitors, for they maintained the same".
They then placed the rope around his neck and he began to pray in Latin. They then willed him to pray in English that they might witness with him: He said: "I pray that prayer which Christ taught." A minister cried out from the crowd: "Pray as Christ taught?" To whom, Mr Johnson replied: "What! do you think Christ taught in English?"
And so he won his crown with the Church's words upon his lips.

Also, on that day, he was joined in his sufferings by Blessed John Shert and Blessed Thomas Ford.
And also by Blessed Margaret Pole who suffered on Tower Hill.


There is a Catholic School that bears the name of Blessed Robert Johnson in Telford Shrophire. It is an utter disgrace that the school website makes no mention of Bl Robert Johnson and his stand for Catholicism.
I must do a quick survey of Catholic School websites that are named after a saint to determine how many feature the history of the faith. I am not confident of finding very many that do.


And for those who want to leave a comment to the effect that Christ taught in Aramaic - I know!
Posted by Richard Collins at Saturday, May 28, 2011