The new, magnificent, exceptional memorial to the Tyburn Martyrs.... 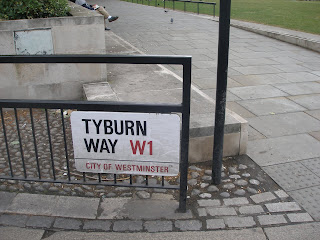 ...the only trouble is that it ain't there! In January 2009 The Catholic Herald's Simon Caldwell wrote comprehensively about how a new memorial had been agreed and how the designs were being drawn up for consideration.
Here is an extract from his report:-

Since the Fifties the site of the gallows has been marked simply by a stone roundel in a traffic island at the intersection of Edgware Road and Bayswater Road, near to Marble Arch, bearing the image of a plain black cross and the words: "The site of the Tyburn Tree."

But Westminster City Council has begun looking for ideas for a more fitting memorial.

The council's Public Art Advisory Panel has discussed some of the proposals at a private meeting, including an etching of the shadow of the Tyburn Tree into pavement brickwork.

Another proposal is understood to involve three illuminated pillars to stand above the site once occupied by the three-sided gallows.

Rosemarie MacQueen, strategic director for built environment at Westminster City Council, said funding was needed and hoped the Catholic community would be able to contribute.

"We have been looking at ways to make the memorial to the Tyburn martyrs more substantial and informative in the future provided we can secure funding for the project, as we feel that the hangings which happened there should be clearly marked for anyone who might want to understand the area's history," she told The Catholic Herald. 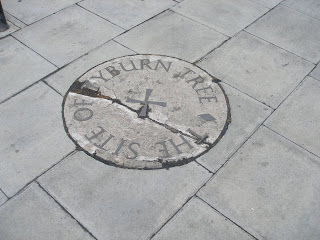 I visited Tyburn (Marble Arch) last Saturday and searched for a long time before I found the 'old' memorial, a round plaque set in a pavement on a traffic island at a busy intersection of the Edgware Road. Is this (or  was it ever) a suitable and respectful place for such a memorial? No, of course not but I guess it's part of the English Catholic 'Uncle Tom' attitude to our secular society - "be grateful for any crumbs you are offered and don't rock the boat" sums it up.

The build up of traffic around the plaque is intense and I feel sure that many who have come to view have risked a modern martyrdom under the wheels of a BMW X5M Series. At some stage a lorry must have mounted the island as the plaque has a large crack across its centre. All in all it is a pathetic apology for the 105 brave souls who died for the faith here.

Having read Simon Caldwell's feature, I felt sure that the new memorial must be just about ready for an unveiling.  I was not too enamoured of more pavement type etchings, would a Council erect a War Memorial at floor level? Not likely.

For my money, one could not do better than to re-create the actual three tree gallows, either in stone or wood, that stood on the spot 400 plus years ago. In terms of location it must move away from the humiliating traffic island to a central site closer to the imposing Marble Arch - there's plenty of space and I for one, am not too worried if it is 42 yards, or whatever,  away from the "actual" spot of the gallows.


So, trembling with anticipation (almost) I telephoned Westminster City Council only to meet with a very efficient and helpful voice at the other end. "No" he had never heard of a "Tyburn what?" but he spent 15 minutes trying to locate news of its progress.
A blank. Never mind; next stop has to be the Press Office of Westminster Diocese - no reply, instead I left my message and awaited a response. None came. Second phone call and another message, still no reply.
I tried again the following day and spoke to a live person who promised that the message receiver would phone me back which she did 10 minutes later.
"The what?" (I was beginning to get used to this scenario) "The Tyburn Martyrs Memorial, where is it located?" I now began to develop my Chief Inspector Dreyfus (aka Herbert Lom) type twitch, it started at one eyebrow and before long it had spread down the right hand side of my face. "It's at Marble Arch" I managed to splutter but, sadly, it appears as if no one in the Diocese knows what has happened to it. And, frankly, no one seems to care.
Are the designs resting on some trendy architect's computer? Has it been created and is now lying forgotten in some Westminster City Council parking lot?


Who knows? Certainly not the Diocese or the Council.

If it's a question of cash I am quite confident that Catholics the world over would chip in a few dollars, euros or zlotys and that it would not take too long to provide a decent sum. Meanwhile, you may pay your respects surrounded by noise, bustle and exhaust fumes looking at a cracked roundel next to manhole cover and surface water relief system 3409.
Posted by Richard Collins at Saturday, May 14, 2011