The Archbishop's worst nightmare - The Vaughan parents carry on the fight!

Just when Archbishop Nichols thought it was safe to go back into the water and get on with tackling the London Oratory School and its avowed intent to screen parents of prospective pupils to determine whether they are real or post code Catholics; the Cardinal Vaughan Parents' Action Group has announced resumption of its fight to elect Foundation Governors of parental choice rather than the choice of the Diocese. 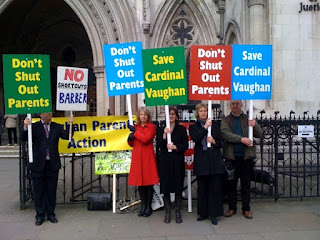 Now, climbing down is always hard; it must be very hard for an Archbishop but that is what his advisors should be telling him to do. Look at the facts, ++ Nichols now has two of the Country's best, most Catholic schools lined up in direct opposition to him. They do not care whether their pupils are sons and daughters of the great and the good (or politicians), they are not worried about how much Papa has in the bank. What they are concerned with is maintaining the Catholic ethos of their school and continuing to achieve magnificent results.
They could not give a toss at the prospect of little Leo Blair joining their ranks - their policy is to be open to all who are practising their faith. Good!
The function of a Diocese is to provide for the spiritual management of their Catholic population; the function of a Catholic school is to operate utilising the skills and experiences of its staff and supporters in accord with Catholic beliefs. Education Departments (of any kind) rarely have the skills of a current, senior teacher or Deputy Head. Yes, I know that Westminster's Education Department is staffed with ex teachers but, in this fast moving world it is no longer valid to say that your experience was gained in the 1980s - the education world has changed! Things have moved on....we have computers, whiteboards, learning resource centres........

Here is the letter from the CVPAG:-


Dear Parents, Staff and Friends of the Vaughan
We have decided to continue our fight for the appointment of two parents as Foundation Governors on the Vaughan Governing Body, so today we lodged papers with the Supreme Court requesting leave to appeal the decision of the Court of Appeal.  If we are granted permission the following, and final, step will be to take the case to the Supreme Court.
Whilst we lost in the Court of Appeal on a split vote (two judges found against us, one for) we remain convinced that the interpretation of the law made by Sir Richard Buxton is what was intended by the law makers. Whilst the drafting of the legislation has clearly been shown to be open to interpretation we firmly believe that the spirit of the law is with us.
The Governing Body Today
As we stated in our last communication, and as noted in the minutes of the Governing Body meeting of 2 February, available on the Vaughan website, if the Foundation Governors decide that they want to pass a motion not only can they hide behind anonymity but they can also hide behind the non-disclosure of the voting pattern - no record of the votes are recorded, a simple “majority” is noted.
The block vote of the 11 Foundation Governors can, and will, pass any motion they desire.  This remains a concern for us in the appointment of a new head teacher and over the coming years for the future of the school.
We do not know what the diocese intends for the school and it is about time that those concerned were open with us all.

Whilst we do not want to go in for a tit for tat with the diocese, we would like to counter some of the misleading and disingenuous claims made by Bishop Stack on the diocesan web site, claims that seek to achieve the moral high ground.
·        “Like the

Appeal Court
, we regret the wasteful court action brought against the Archbishop of by a number of parents associated with the Vaughan Parents Action Group”.  Firstly, the action was taken by the elected Parent Governors; the Vaughan Parents’ Action Group came into being after the action had been initiated in order to support the Parent Governors.  We remain indebted to this support.  Secondly, we also regret the need to have pursued this course of action.  It was however, necessary because the diocese would not appoint two existing parents as Foundation Governors
·        “It is important to note that the ‘Vaughan Parents Action Group’ is not supported by the School. It is not to be confused with the Parents Association, which is the recognised parents’ association. Rather it is a campaign whose leaders include two former Governors of the school and the former Headmaster”. One characteristic that the diocese has demonstrated over recent years is that anyone who does not obey is “dealt with”.  For two Chairs of the Governing Body and four other Foundation Governors this meant being replaced when their term was complete irrespective of their wishes to continue to serve the school.  The Parent Governors took the specific decision not to compromise members of staff of the school for fear of retribution on them.  Likewise all communication from the Vaughan Parents’ Association goes through the school, so a separate sub-committee was established.
Next Steps
Despite requests from the Parent Governors at each of the 3 Governing Body meetings this academic year, the Governing Body by virtue of the Foundation Governor majority vote is still refusing to meet with parents.  We will make this same request at the forthcoming Governing Body meeting.
You may have noted the recent departure from the Governing Body of Fr Michael Johnston who was appointed in September.  We would ask the diocese to show some goodwill and now appoint a parent as a Foundation Governor.  Actions speak louder than words.
Finally, and once again, we wish to thank parents and friends for your overwhelming support of our action.  Without your help and generous funding we would not have been able to take this action through the courts.  We are particularly grateful to the Vaughan Parents’ Association and the Vaughan Parents’ Action Group for their ongoing, tireless and very effective support.
The Parent Governors:
·        Dr Jim King
·        Mrs Jackie Knight
·        Mr John Murphy
·        Mr Andrzej Rumun
·        Mr Janusz Zajaczkowski
12 May 2011
Posted by Richard Collins at Sunday, May 15, 2011