THE ANGEL THAT GUARDS THE GATE 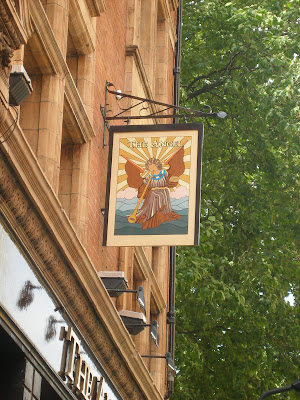 The Resurrection Gate aka The Angel

At the head of London's New Oxford Street and what used to be the approach road to Tyburn Road (Oxford Street) lies the small High Street of St Giles. Adjacent to the Anglican church is a pub called The Angel. It is not overly attractive, it is what it is, a busy pub on the fringes of Soho and Theatreland.

But back in the 16th and 17th centuries this pub (or tavern as it was probably called then) had a different name.
It was called "The Resurrection Gate" and it was here that the drivers of the wagons and hurdles carrying the martyrs used to stop off for a breather and, maybe, a touch of liquor, to act as a "stiffener" for the ordeal ahead.

The gallows of Tyburn stood at what we now call Marble Arch a mere mile or so distant, death by being hanged, disembowelled, castrated and quartered was less than an hour away.

There is no record as to whether those brave men who were shackled to the wagons or strapped to the hurdles were ever able to enjoy one last drink but what does survive are two sayings that are attributed to this last halt.
The first saying is "One for the road" meaning Tyburn Road and the second is "I'm on the wagon" meaning that I can't have a drink as I am in charge of the wagon.
These very obviously contradict each other which does not bode well for their veracity but I did find them recorded in a book published in the 1920s on Catholic London. However, my view is that they are more myth than fact.

I do not know when the tavern changed its name to The Angel or what the reasons were for doing so. For many years it was in my family's hands and I have pulled many a pint there in my youth. The locals claimed that the very large and gloomy cellars held an evil presence but despite working down there many times late at night I never experienced anything.
But then, I am a Catholic.

OF YOUR CHARITY PLEASE PRAY FOR THE REPOSE OF THE SOUL OF JOHN GRIFFITHS WHOSE ANNIVERSARY IT IS TODAY
And God shall wipe away all tears from their eyes and death shall be no more, nor mourning nor crying, nor sorrow shall be any more, for the former things are passed away

Eternal rest grant unto him, O Lord and let perpetual
light shine upon him, may he rest in peace. Amen