Despite the fact that it's origins are horribly commercial, I suspect most Fathers look forward to receiving a gift of sorts from their offspring.

I was providentially fortunate to receive gifts from all four of my sprogs; they all remembered, DG. 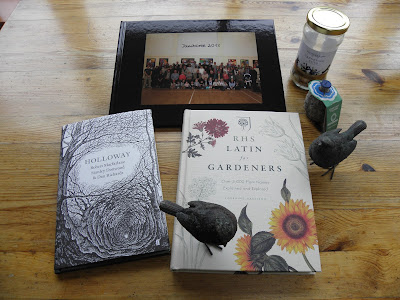 Dealing with them in descending order, I received 'Holloway' from my son (we share a love of the writings of Robert Macfarlane (I know not his fellow authors); and the fact that the book is dedicated to the memory of the late Roger Deakin (he who used to swim in every type of stretch of water in the British Isles; from bogs to lochs and canals to salmon rivers, makes it extra special).

The subject matter is the area of Dorset made famous by Geoffrey Household's novel 'Rogue Male' - the patch of land around the parish of Chideock.

In the novel, Household's hero takes refuge in a Catholic Chapel (Our Lady and the English Martyrs at Chideock) while on the run from Nazi agents who want to do rather unpleasant things to him. 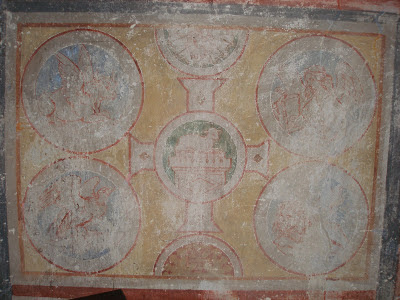 A section of the wall from the sacristy in Chideock

He then moves from the Chapel to an old drover's lane, so overgrown with trees and brambles that a natural and very private archway (Holloway) is formed and this is where he holes up.
This disused track is still there today (if you can find it) and thus the subject matter of the book focuses on track and chapel.

If there were Michelin stars awarded for Churches, the Chapel of Our Lady and the English Martyrs would surpass the normal three.
On the first floor, in the old sacristy, you may make out faded frescoes on the walls; the very same that would have been brightly visible to the martyrs of Chideock: among them being, Fr Thomas Pilchard and his lay companion and convert, William Pike (yes, really). Fr Hugh Green (who was beheaded and his head used as a football by the loutish mob) and Fr Cornelius.

But, I digress. Two iron robins and a jar of Fortnum and Mason nuts formed gift number two.
I have never eaten F & M nuts before but can vouch for the fact that they are so good that one may inhale them.
The robins, as I write, are perched on my shelf watching every move I make, ready to flit down for a meal of a few iron filings.

The third gift was another book but one comprising photographs from a recent family get together; making a memorable record of a memorable day. One that will now stay as clear in my mind as the day itself.

And, finally, a book on Latin.
Ho hum you may say but this is 'Latin for Gardeners' and it deals with the origins of plant names proving yet again, as in medicine and zoology, Latin is far from dead and in constant use.

And the bomb?
Well, this is a seed bomb, more hand grenade really, impregnated with seeds of the blue cornflower.

You just remove the firing pin, John Wayne fashion, and lob into the middle of a flower bed.

The rain and nature does the rest.

My sort of gardening.

But.....has a Father been forgotten? A Father overlooked?

Yes, remember that our priests are, of course, our most important Fathers, and, if you have not bought a gift for your priest, remember him in your prayers.

A prayer for Priests

O Jesus, eternal Priest, keep Thy Priests within the shelter
Of Thy Sacred Heart, where none may touch them.
Keep unstained their anointed hands, which daily touch
Thy Sacred Body.
Keep unsullied their lips, daily purpled with
Thy Precious Blood.
Keep pure and unworldly their hearts, sealed with
the sublime mark of the Priesthood.
Let Thy Holy Love surround them
From the world’s contagion.
Bless their labours with abundant fruit,
And, may the souls to whom they minister,
Be their joy here and their everlasting
Crown forever.

Mary, Queen of Priests, pray for us:
Obtain for us numerous and holy Priests.
Amen