This is what's "down the road" 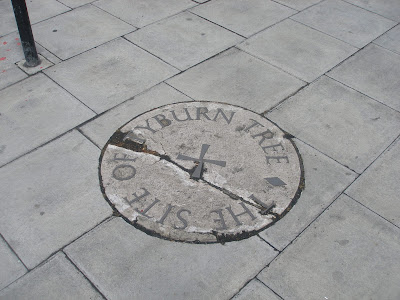 This, for those from overseas who might not know it, is the only site memorial that we in Great Britain have to our Reformation Martyrs - the men and women who offered up their lives and suffered most brutally for the sake of Our Blessed Lord and His Mass.
The memorial lies on a small traffic island at one end of London's Edgware Road facing Marble Arch.
It is hardly what one could describe as uplifting; a small, cracked roundel set into the pavement.
St Thomas More (yes I know he was martyred at the Tower, not Tyburn) would have said that this apology of a memorial was the result of "a weak clergy lacking in grace".
Somehow that quote resounds constantly in my ears these days.
I posted on this issue about 12 months ago when I had only just begun my blogging nightmare journey.
I did not really expect any sort of reaction from the Church authorities and I have not been disappointed.
But, really, it is shameful!
Would some brave soul bring this issue to the attention of Archbishop Nichols and would His Grace make the cause for a fitting memorial one of his New Year resolutions?
With the London Gay Pride event due to pass within a few hundred yards of Tyburn this summer would it not be a good and wholesome thing to mark what we Catholics deem important?
This post would not be complete without coverage of the 'new' image that is on display, just a few rope lengths from where the martyrs shed their blood - here it is.............


It was destined to be in place for 12 months up until April 2011 but from all accounts it's still there. Wonderful!
Posted by Richard Collins at Saturday, December 31, 2011