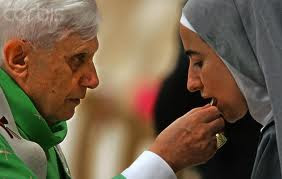 An exciting breakthrough on the Higgs boson front.......scientists have discovered the God particle at every valid Catholic Mass in the world!

Wikipedia describes a particle as follows:-

In the physical sciences, a particle is a small localized object to which can be ascribed several physical properties such as volume or mass.[1][2] The word is rather general in meaning, and is refined as needed by various scientific fields.
Whether objects can be considered particles depends on the scale of the context; if an object's own size is small or negligible, or if geometrical properties and structure are irrelevant, then it can be considered a particle.[3] For example, grains of sand on a beach can be considered particles because the size of one grain of sand (c. 1 mm) is negligible compared to the beach, and the features of individual grains of sand are usually irrelevant to the problem at hand.