Achieving the unthinkable - feeding a zombie

When I wrote the first of my 'zombie' posts this week  realised that I was putting myself in the stocks by asserting that I had the answer as to how the church should reach out to that massive chunk of disaffected youth who have never known Jesus Christ other than as a casual blasphemy. 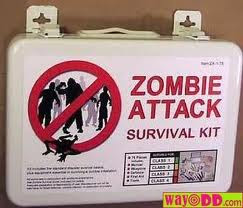 The truth is, I do not have a cast iron answer, but I do have a number of strategies which is, perhaps more than most Bishops have in their war chest.

For this initiative to be successful it requires government support and, possibly, even changes to legislation. It may also be an unpalatable fact that the initiative may not come in time for this generation, maybe we are aiming at those who are currently in the 12-14 age group and we have to forget their older brothers and sisters.

It is also much easier to state what will not work.

Priests dressing up in trainers and shellsuits won't work, youth clubs, won't work and heavy metal Masses won't work.
A zombie can smell condescension a mile off and remember, this group are the walking dead; to bring them back to life is going to take something more than a parish disco to wean them off blood sucking.

OK, let me assert a few 'facts' from my limited experience of "yoof".

Firstly, as my friend Andy used to say: "If you scare them half to death and they enjoy it, they won't want to vandalise a phone box ever again."
Andy runs an outward bound centre and specialises in taking zombies young people with behavioural problems, out to sea in very small rubber boats, RIBS as they are called.
They spend a day clinging to bits of rope, white knuckled and white faced, whilst ploughing through vicious waves as can only be experienced off the most westerly part of the Pembrokeshire coast - the area of sea is known on maps as "The Bitches" and that says it all.

This then is the foremost spanner in my toolkit. Take a programme such as the Duke of Edinburgh's Award Scheme, (except that this will be the Prince William Achievement Scheme) make it mandatory for all and adapt it so that it is focused on achievements that include passing a series of 'experience' tests. Things such as taking a kayak up a mountain stream, living off the land (yes, really) for 3 days, climbing a cliff, coasteering (Google it), trekking cross country with horses and map reading thrown in for good measure.

The last module they will have to complete will be a three day stint at the local undertakers, cemetery or crematorium. They will do the gopher tasks but, most importantly, having experienced 'life' on the programme, they will now experience' death' - Oh Mummy! (or, Oh Mommy, if you are an American).

Now please be clear; this is not a boot camp regime I am advocating. They will start off hating it but end up loving it.

Why? Because this is the first step to them appreciating self respect - not self esteem, respect. And self respect, for this group is a pre-requisite to the process of understanding why they exist and who made it possible for them to exist.

This achievement scheme will be compulsory within the school system and will carry a qualification rating equivalent to 3 GCSEs.

But that is not the end of it, it is only just beginning. After they finish school and before they start work, University or the benefits system they will have to do  a 6 month assignment that will involve them in a range of community and good citizen type projects. This will be followed by a further 6 month period spent in a hospital, care home or similar environment and one month of that time must be spent in a hospice.
The state will pay them for doing this. It will have the rating of a National Diploma vocational qualification.

Yes, you heard correctly, they will receive a retainer for undertaking this one year programme, paid by month but restrospectively.
Have a cold for two days and fail to attend and you won't get your monthly allowance.

But, but you cry....how can the country afford it?....and what on earth has it got to do with evangelising in the first place?

And as for evangelisation?  Well once a sense of self respect has been engendered, the desire to play computer games around the clock or watch endless television quenched and an awareness of their fellow man  embedded, the real bringing to life process begins (more on that next week).

Of course, you say: "It will never happen - the lefties won't stand for it, there will be rioting on the streets" But....we have that already!
Posted by Richard Collins at Friday, December 02, 2011

Email ThisBlogThis!Share to TwitterShare to FacebookShare to Pinterest
Labels: Evangelising as requested by the Pope, Zombies