FEAST OF ST PIO! A SAINT OF OUR TIME!

"Prayer is the best weapon we possess, the key
that opens the heart of God" 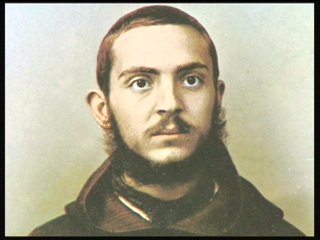 The feast of a great saint, one who died only in 1968 and whose funeral is recorded on film.
The accounts of Padre Pio, the miracles wrought through his intercession, the episodes of bilocation and his ability to read the souls of men are almost too numerous to select any particular one. So I have chosen to feature an extract regarding the day that he received the stigmata (20th September 1918)

It was June 15, 1921, and in answer to a question posed by Bishop Rossi, Padre Pio said: "On Sept. 20, 1918, I was in the choir of the church after celebrating Mass, making the thanksgiving when I was suddenly overtaken by powerful trembling and then there came calm and I saw Our Lord in his crucified form.
"He was lamenting the ingratitude of men, especially those consecrated to him and favored by him."
"Then," Padre Pio continued, "his suffering was apparent as was his desire to join souls to his Passion. He invited me to let his pains enter into me and to meditate on them and at the same time concern myself with the salvation of others. Following this, I felt full of compassion for the Lord's pains and I asked him what I could do.
"I heard this voice: 'I will unite you with my Passion.' And after this the vision disappeared, I came back to myself, my reason returned and I saw these signs here from which blood flowed. Before this I did not have these."
Padre Pio then said that the stigmata were not the result of a personal request of his own but came from an invitation of the Lord, who, lamenting the ingratitude of men, and consecrated persons in particular, conferred on Padre Pio a mission as the culmination of an interior mystical journey of preparation.

This video clip (sorry about the awful and inappropriate guitar twanging) gives a very moving picture of the piety and devotion this great saint had when celebrating the Holy Mass, the Mass of all time, the Tridentine Latin Mass - "he suffered at every consecration during Mass". Worth remembering that Vatican officials treated him abysmally and, for many years he was treated as an outcast, even after his death.
Padre Pio, St Pio - Ora pro nobis
Posted by Richard Collins at Friday, September 23, 2011