...."the British Governement hereby requires you to report for active service in a war zone as from....." 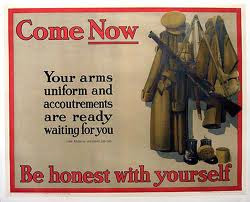 If a letter commanding you to report for active service landed in your postbox how would you react? I suspect that, not many of us would run around punching the air and giving high fives to all and sundry.
I guess we would sit down and have a strong cup of tea drink before breaking the news to one's wife or husband.
War. Away from home for months, maybe years. Facing untold hardships and, every day, staring death in the face....gulp! Have another strong drink.
But could we or would we turn down the Government's request to become part of the military? Most Catholics hold hard to the belief that the legitimate protection of innocent lives is a matter that must be accepted even if it entails the killing of one's fellow man. "Thou shalt not kill" works both ways; wrong to wantonly murder and wrong to allow wanton murder to take place, even if it does mean taking lives in the process.
Conscientious objectors (COs) traditionally but not exclusively, come from the ranks of Quakers and homosexuals (and sometimes people of a faith that is subject to utter persecution such as the Jews in the last war).
This is a most selfish stance to take. It allows your neighbour to offer the ultimate sacrifice while you stay at home tucked up in a warm bed.
Belloc had a good way of encapsulating the CO position when he wrote:
"Pale Ebenezer thought it wrong to fight,
but Roaring Bill, who killed him,
thought it right"
﻿For those whose beliefs just will not permit them to take up arms there is always the Ambulance or Medical Corps or any one of several dozen non combatant roles. Many medals for gallantry have been won by homosexuals and others in these positions. But I have no time for the full on COs who refuse to play even a passive role.
Today I speculate on how many men and women, upon being sent conscription papers, would play the CO card. I suspect that the numbers electing for a year or two in jail rather than a year or two facing enemy fire, would be a great deal higher than at times of previous call-ups.
We do suffer from a malaise of moral decay that will, in the event of war, produce an abundance of those who will not fight and claim that their conscience prevents them from doing so.
It would be interesting to do a research survey to try to discover just how many of those serving Queen and country also believe in God. I suspect that the majority do. I also believe that the majority of those wishing to shirk their duty are non believers. I cannot prove those points, just a personal belief.
I hope that the time never comes when the point is capable of being proved.
Posted by Richard Collins at Thursday, August 04, 2011