A new order is needed for the seminaries 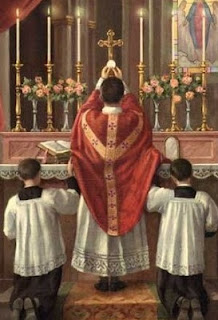 Every seminarian should be taught this

Not a new monastic order but a new order with regard to teaching how to celebrate the Extraordinary Form of Mass.

It is of no use looking to the parish priests to change their ways.
There is no way that the bulk of current parish priests will undertake to learn how to celebrate the old Mass and it would be a fruitless and divisive exercise to compel them to do so.

An attitude of mind is as necessary as an awareness of the actions and tone of the Latin Mass - so, write off the old guard.

But, in the seminaries it is a nonsense that a six or seven year programme designed to equip young men for the priesthood, deliberately omits one half of the Mass content; the EF Mass.

It is clearly a nonsense to have two forms of the Mass but only to teach the Ordinary Form.

Could you imagine a syllabus for the priesthood that omits philosophy or theology?

No, of course not. It would be ludicrous.

To only offer the Ordinary Form of Mass was surely not in Pope Benedict XVI's mind when he issued  Summorum Pontificum.

The Pope Emeritus never issued a statement or made an address without the concept and the consequences being clearly thought through.

While many castigate him for his Regensberg address on Islam it had the effect of lancing the politically correct boil that would not admit a discussion on Islam let alone any form of criticism.

Summorum Pontificum was clearly designed to right the wrong and to set free the Latin Mass that had been enshrined in the realm of forbidden territory for 50 years - so why is it not part of the training programme?

Of course, we all know why, but what to do?

Perhaps we need a lobby group to organise Rosary sessions outside the Diocesan HQs much in the style that the 40 Days for Life people pray outside abortuaries.

A group that will ginger up the Bishops and embarass them into action (they fear adverse media coverage more than they fear old Nick).

Who will undertake this role?  Would the Latin Mass Society get to grips with this initiative?

It might give them a much needed raison d'etre - they must have a function other than arranging Mass schedules and publishing unreadable magazines.
Posted by Richard Collins at Friday, March 08, 2013