A Seminarian speaks out 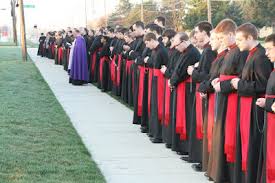 US Seminarians praying outside an abortuary﻿


A Seminarian from the USA has responded to my last post regarding the EF Mass being taught in seminaries.

He wishes to remain anonymous and this is perfectly understandable.

I once asked a seminarian studying at Allen Hall, if he planned to celebrate the EF Mass when ordained.

He gave a fudged answer. He said:

"I will do whatever the Holy Father wishes me to do" - He didn't say yes and he didn't say no.

It is quite obvious that, when Pope Benedict reasserted the place of the Tridentine Latin Mass in the life of the Church, he was not doing it because he had nothing else to do that Wednesday afternoon.

He issued his Moto Proprio because he wanted his priests to be free to celebrate both forms of Holy Mass; Ordinary and Extraordinary.

EF Pastor Emeritus and Ora Pro Nobis have both commented on the fact that, whilst the Latin Mass is very important, there are other pressing issues that Seminary Directors should be facing up to.

The books selected for study; they need to be orthodox and sound, not the Catholic world according to Clifford Longley or Kung's Rough Guide to Hell.

The homosexual issue desperately needs to be addressed by those in the seminary system and by the Bishops.

And the pastoral aspect of the priesthood needs sharpening up.

Twenty three years ago I asked the local PP to bless our home; we're still waiting. I have an aged relative in need of the Sacraments, she is still waiting.

But here is the comment made by the Seminarian - it struck a chord with me and I hope that he does not mind me incorporating it in a post:-

"I think you have hit the nail on the head. I'm a postulant at a Seminary in the U.S.A. and I confess that I'm much dismayed at the apparent lack on interest in giving seminarians a grounding in Latin and the Extraordinary Form. Ironically, among my classmates, and indeed, I believe among the wider seminarian community, there is strong interest in preserving the Extraordinary Form, not only for itself, but because we feel knowledge of it will increase our understanding of, and reverence for, the Ordinary Form. Unfortunately, our formation programme does not only not emphasise this aspect of the Church, but completely ignores it. I for one, would love to see things altered, but as a seminarian, one feels somewhat powerless and not in a position to question his formation superiors. However, keep praying that things will change; there are young men out there who want to preserve the full, complete and orthodox views of the Catholic Church".

Email ThisBlogThis!Share to TwitterShare to FacebookShare to Pinterest
Labels: Reform the Seminaries, Restore the EF Mass in Seminaries, Seminarians