Should there be a dress code for priests?


OK, I know that there is a dress code for priests, it's a clerical black suit and a dog collar. at least, that's what you see mostly on the streets of Rome.
Generally, however, there seems to be a trend amongst some for dressing down; even to the point of slobbishness. Should priests normally appear in public in trendy three quarter length slacks (if that is, indeed, trendy). How about jeans and T shirt complete with trainers?
Now I may be showing my age here but I believe that a priest should look like a priest. There was a trend in the backdraft after Vatican II, for priests to wear, at first, Anglican Grey, then it morphed into a sort  of Baptist Blue and now, it seems that some young and not so young priests like to dress casually. I don't like it and, what is worse, casual often seems to drift into sloppy and even dirty! I speak from personal experience when, a few years ago I was in hospital and was visited by the Catholic Chaplain. He was in his late 60s and dressed in an old, stained cardigan and baggy trousers. He proceeded to pray over me and even lay hands on me which I was not very keen on, especially as I was a touch fragile at the time and he was none too gentle. No screens were drawn and I wondered afterwards, what the other residents of the ward must have made of it. A total stranger wandering around bashing patients over the head.
Catholic clerical garb has a meaning and purpose, not least of which is its instant recognition which may provide a lost soul with a chance to spontaneously approach in public having perhaps consistently put off an arranged meeting with a minister for whatever reason. Nuns, of course, largely seem to be a lost cause having forsaken the habit and wimple for twin set and pearls and discarded the crucifix for a stainless steel brooch that is only vaguely cross like.
My impression is that there are two schools of priests those who 'do' and those who 'don't' but, surely  we need a norm? You can't have an army with troops kitted out in multiple styles of gear (OK, I know the Chindits did it and the SAS do it, but, generally the case holds).

How do you regard this issue? Would you prefer the 'civvie' priest above or the 'uniform' priest below?
All comments appreciated. 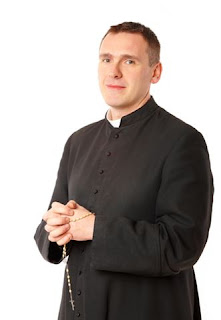