When we remember, let's also remember US Forces

The citizens of the USA seem to come in for a lot of criticism these days, often from young people and often from ethnic minorities who have settled in Great Britain. Some of the criticism may hit a mark but all of it fails to recall the almighty debt we owe to America for their efforts in the Second World War. We can carp about their late entry and other issues but we cannot remove the fact that we are free today because of the USA.
If you doubt these words, take a trip to Normandy and visit the American war cemeteries. you will find rank upon rank of headstones of young men barely old enough to go into a pub and order a beer.
I also include Canadians and other forces here but I am highlighting the US troops because today, many British Jews and Muslims, students, homosexuals, gypsies, immigrants and others, would not be here but for our American friends and allies. 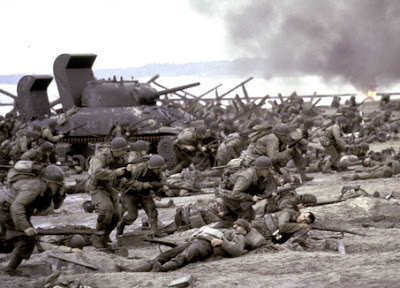 The muffled drum's sad roll has beat﻿
The soldier's last tattoo;
No more on life's parade shall meet
That brave and fallen few.
On fame's eternal camping ground
Their silent tents are spread,
And glory guards, with solemn round,
The bivouac of the dead.
Theodore O'Hara (1820-67)
American Poet and Soldier
Posted by Richard Collins at Saturday, November 13, 2010

Email ThisBlogThis!Share to TwitterShare to FacebookShare to Pinterest
Labels: D-Day, Remember, US Forces