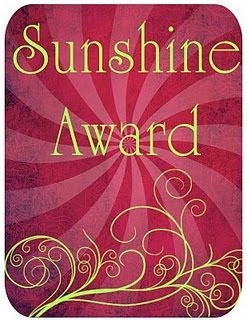 Thanks to my dear Friend Eccles (who lives an austere existence as a hermit on an island on the great River Thames) I have the honour of being a recipient of a Sunshine Award.

Having feverishly scanned the New Year Honour pages of The Daily Telegraph only to find that, yet again, a clerical error has robbed me of the insignia of The Order of the Garter, I am pleased, nay ecstatic, to receive an honour that is well above that of the Garter, err...if you follow me.

The down side is that I have to reveal ten facts about myself.....and that comes hard.

On a more positive note, I have also to nominate ten other blogs whom I believe are worthy of an award.
Plus, of course, my nominees should respond in like by naming their top ten etc.

1. I am an Englishman by nature despite having a fair dollop of Irish blood and living in Wales.

2. I have four adult children who constantly amaze and inspire me.

3. By instinct, I am a countryman and enjoy shooting and fishing when I get a chance

4. I would like to be interred* in the church of Our Lady and The English Martyrs in Chideock, Dorset (visit it if you possibly can).  * But only when dead.

5. On occasions (and only on occasions) I  drink a real ale called The Reverend James ('The Rev'). That is my only contact with Anglicanism.

6. Most Tuesday evenings in the off season, I may be found taking part in the pub quiz at 'the Brides' in Littlehaven - in rather boisterous and slightly naughty company.

7. Thanks to the Providence of the Almighty, the last 25 years of my career in education have been spent travelling in some weird and wonderful parts of the world.

8. I have eaten and enjoyed (as a result of number 7) dog, cat (delicious), scorpions, bees, sea slugs, cactus, snake, kangaroo, crocodile and many more of God's creatures.

9. As the youngest of seven, I grew up in Hounslow which is now at one end of the main London Heathrow Airport runway.

10. I like dogs, but only really lurchers or whippet type ones that can run like the wind.

There. All has been revealed, now for my ten top bloggers......

1. Mark at De Omnibus Dubitandem Est (which roughly translates as the bus has left, you'll have to take the bike)

2. An English Catholic in Hong Kong whose blog is called Non Angelus sed Anglus which (as any fule kno, is a geometrical reference)

3. Goes to Longbows and Rosary Beads (at last, a female blogger). Pearl of Tyburn is a good friend but, more than that she is a Britophile (and there ain't many of those around these days).

4. The Society of Such Pius Gents is, I believe, a relative newcomer to the scene but is highly deserving of an award.

5. The Low Churchman's Guide is, I am sure a Catholic blog hiding under an Anglican surplice but, either way, he/she/them get my vote for being dry and witty (but such an award may be too Low Church for them).

6. Now here's one to amaze and surprise, I am nominating the LMS Cardiff blog for an award because they are so jolly alive. Not often I praise the LMS but Macklin Street could learn a lot from their Cardiff crew, well done!

7. And another one for Wales....Paddling Upstream (it's what they are forced to do in the Archdiocese of Stackshire) keeps the traditional flag flying for Welsh Catholics and those of us who live in Wales.

8. These awards are getting a distinctive Welsh flavour as I nominate Lucas Cambrensis for a Sunshiner. Luke is, I believe, a man with his feet in the modern Church but his orthodoxy is heartwarming. I hope to meet up with him one day.

9. Back to England and that stalwart blogger Ora Pro Nobis (the traditional Catholics slogan for 2014). Not only that but Mike C works in FE and, having served 25 years in that sector, he has my sympathies.

10. Finally, an American blogging friend, Patrick Button. Patrick has done a bit of travelling and earns my respect, especially for his travels in some pretty unfriendly territory. God bless you Patrick.


So that's it, it only remains for me now to inform those good folk and to thank them all for their inspiration, sense of humour and Faith.