A letter.....from beyond the grave

Today I came across some old correspondence from Anne Roch Muggeridge, dated January 1995.

If you do not recognise the name let me tell you that, apart from being the wife of John Muggeridge and Daughter-in-law of broadcaster, Malcolm Muggeridge, she was a writer of some substance on matters concerning the Catholic Church. 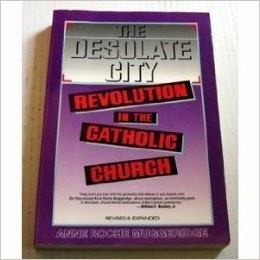 Her works include 'The Gates of Hell' and, her most popular book, 'The Desolate City'.

The background to the letter came from one of her sons who stayed with us in Wales for a few days and he subsequently asked his mother to send me a copy of her book.

The letter was an unexpected bonus and I feature it here because it gives an insight into both the state of play in the Church at that time and, of course, how she regarded the decline into clown Masses and similar.

At the time Anne accepted the validity of the Novus Ordo but, I believe that, shortly afterwards, she only attended the Latin Mass, having become totally opposed to the NO.

Here is her letter:

"My dear but idiot son, Matthew, who is in the Legionaries of Christ has asked me to intrude upon your religious privacy, and send you a copy of my book on the state of the Catholic Church.
He tells me that you cannot bring yourself to attend the Novus Ordo, and, believe me, I know how you feel about that.

Our Bishop gave us an old rite Latin Mass under the indult, and we've attended it since July 1985, but only for Sundays.

We get treated like half wits and schismatics, but the Mass has been a God send. Do you have access to one, even if it's a long way?

I feel grief and rage over what has happened, but I do, at the time of writing, anyway, accept the validity of the Novus Ordo when it's said according to the mind of the Church.

Of course, one often wonders about specific Masses here and there, whether certain Masses are so said.
We have found good priests and decent Masses, and we go to them on weekdays.

I'd leave the Church and pray privately but I can't leave Our Lord - if He has to stick it out, I can, though generally in a bad temper.
And one's children need an allegiance to the Faith in bad times as in good.

I know you've thought all this. I'm saying it because my dearest Matt asked me to, because of my own experience and sorrow.

This is a dreadful time. Pray God it ends soon.

Shortly after writing this letter, Anne (so I was informed) stopped attending the Novus Ordo Mass.
She died, in her 75th year, on 14th September 2010. May she rest in peace.

Her son, Matthew, had befriended my son, also called Matthew, when he came across him in Lourdes.

My son was 17 years of age and had travelled across France solo and he appreciated the support given to him by his namesake.

Matthew Muggeridge was an outstanding young Catholic who had an intuitive way of communicating with all that he met.

At the end of his stay, as we said goodbye at Haverfordwest Station, he tackled a group of yobbish youths who were shouting and running around the platform.

In clerical wear he approached them and chatted with them as if he had known them all their lives and they immediately stopped their mullarkey and were soon eating out of his hand - literally, as he had produced a bar of chocolate and was busy passing it around.

The exhortation: "Feed My sheep" can begin with a bar of Cadbury's Dairy Milk.