One of the many elements of Catholic life before the Second Vatican Council came along was the problem that many priests had with OCD, obsessive compulsive disorder. 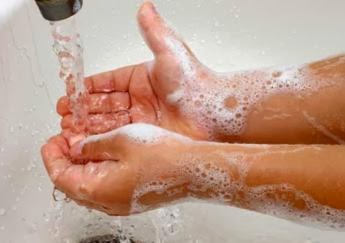 This took the form of excessive hand washing and led to many and various skin conditions as a result.
The hands of sufferers always looked red and raw and, sometimes they would even bleed.

Why? Why did such a condition, if not usual, then certainly not unusual, prevail among the clergy?

The obvious answer would be that there was a much greater element of reverence given to the Blessed Sacrament then.

There was, I believe, a very real awe of the True Presence.

We had communion rails and communion cloths, just in case any fragmentation between hand and mouth occurred.

Forty Hours devotion took place regularly in every parish, we had The Guild of the Blessed Sacrament, Benediction every Sunday and, of course, we had what I shall call the Tridentine Latin Mass.

The TLM demands reverence and extreme care of the consecrated host, to an exacting degree by today's standards.

No layman or woman would ever dream of touching a host pre 1960.
In fact, no lay person would even touch the sacred vessels (and I don't do so even today, on the odd occasion that I might serve at Mass).

Everyone received the host kneeling and by mouth - and that says it all really.

The poor priest charged with the responsibility of holding the Body and Blood of Christ, Son of the Living God, must have felt tremendous pressure.

It used to be said that a priest celebrating a Latin Mass, even with the best of intentions, committed a basic fourteen venial sins in so doing.
Quite how that was worked out I do not know but it illustrates the extreme concerns there were regarding piety and the liturgy.

The result, I assume, was the obsession with hand washing, perhaps it exists today to a lesser degree, but I doubt it somehow.

And that form of OCD was then replaced with another - an Obsessive Catholic Disorder as the Catholic Church went into freefall and parish life, in its varied and diverse forms, ceased to exist.

But, before that happened the Faith, certainly in England, enjoyed a relatively high profile.

We had processions through London on a regular basis, Father Peyton and his Rosary Crusade came to London in the early Fifties, there were trans Diocesan Passion Plays, performed in the public arena; at Speaker's Corner you could listen to the likes of Mgr Ronnie Knox (he was always referred to as 'Ronnie Knox' by priests and laity alike) and Fr Donald Proudman OP., and, even, exhibitions of the Faith at Olympia and other centres.

On television, each night the viewing ended with the Epilogue and the Church had a fair slice of the action with priests and bishops regularly speaking on faith and morals.
Cardinal Heenan, of course, was always on the small screen, fighting the Catholic corner with vim and vigour.
The phrase "Who knows what's down the road" would not have been heard from that great man.

The Catholic Church had a real presence in the broader community and one of the phrases often used by those who were not Catholic was "I don't go along with the Catholic religion but I respect the Church because everything is black and white, there are no uncertainties"

That presence has disappeared today.

Ecumenism has been a blind alley leading to much joining of hands but no teaching of the truth.

In fact, it has had the reverse effect with Anglicans and others who are left with a false sense of security, believing that all will be saved whether you believe in divorce, contraception, abortion, euthanasia or homosexual practices.

The OCD of Vatican II is still with us when we hear Catholics speak of "the Spirit of Vatican II" as if it were the fourth person after the Father, Son and Holy Ghost.

What is important about Vatican II are the proceedings themselves where recognition of the value of the old Mass, of a Latin liturgy, of plainchant and Benediction and so on, were highly valued and emphasized as such.

We need to constantly remind ourselves of that fact.