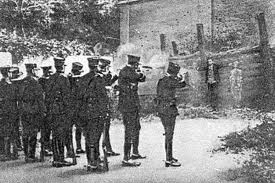 Today, November 23rd,  is the feastday of Blessed Miguel Pro, Mexican, Jesuit and Martyr for the Faith.

There are many heroic figures who died for their Faith in the 20th century but Miguel Pro must surely rank up there with St Maximilian Kolbe, St Teresa Benedicta and, of course, Blessed Titus Brandsma.

He joined the Jesuit Seminary and, one year later, Mexico was embroiled in one of the most savage persecutions of Holy Mother Church.

Priests were executed in the streets, religious disbanded and many of the prominent Catholic laity disappeared never to be seen again.

Churches were desecrated and defiled being turned into stables much as in England and Wales in the times of Henry VIII and Elizabeth I.

Fleeing from the anti Catholic government, Fr Pro completed his studies in Europe only returning to Mexico in 1926 suffering from a severe gastric complaint.

The persecutions were still in full flow but this did not cause the young priest to pause for thought.

He threw himself into the spiritual fight against the regime of President Calles.

He ventured into areas occupied by the authorities and visited houses fearlessly to bring the Sacraments to the young and old, the living and the dying.

Before long the police and militia targeted him as public enemy number one. And her had many escapes, often adopting a number of disguises to fool his pursuers.

On one occasion when being shadowed by the police, Fr Pro grabbed the arm of a young woman and embraced her as they walked up the street, throwing the police off the scent in the process.

A series of bomb attacks aimed at the Calles Government resulted in Fr Pro and two of his brothers, Humberto and Roberto being caught up in the dragnet following the blasts, innocent, as they were, of any involvement.

Without any trial, the authorities swiftly executed Fr Pro, only 36 years of age.

He was taken from his cell and marched into the prison yard where he refused a blindfold.

In the true style of a martyr he blessed the firing squad before declaring his innocence before Almighty God.

Kneeling in prayer he held his Rosary in one hand and a crucifix in the other, and then, standing against the bullet pocked wall, he spread out his arms to form a cross and cried out : "Viva Cristo Rey"

He fell as the rifle shots cracked out and a soldier delivered the coup de gras to the broken body.

That is very much a paraphrased version of a short but intensely spiritual life on earth, one that closely resembles that of St Edmund Campion in his final years.

Fr Pro was, by all accounts, a great wit but his humour never strayed into realms of immodesty.

In particular, I like the prayer that he wrote, it is a prayer for the sick and the troubled.

It is not a sweet, prayer couched in flowery words; it is not a prayer for the faint hearted.

But it comes straight from the heart of Blessed Miguel Pro and, as such, must surely be heard by Jesus Christ, Christ the King!


Does our life become from day to day more painful, more oppressive, more replete with afflictions?
Blessed be he a thousand times who desires it so.
If life be harder, love makes it also stronger and, only this love, grounded on suffering, can carry the cross of my Lord  Jesus Christ.

Love without egotism, without relying on self but enkindling in the depth of the heart an ardent thirst to love and suffer for all those around us: a thirst that neither misfortune nor contempt can extinguish…..I believe, O Lord; but strengthen my faith….Heart of Jesus, I trust in Thee; but give greater vigour to my confidence.

Heart of Jesus, I give my heart to Thee; but, so enclose it in Thee that it may never be separated from Thee.


Heart of Jesus, I am all Thine; but take care of my promise so that I may be able to put it in practice even unto the complete sacrifice of my life.